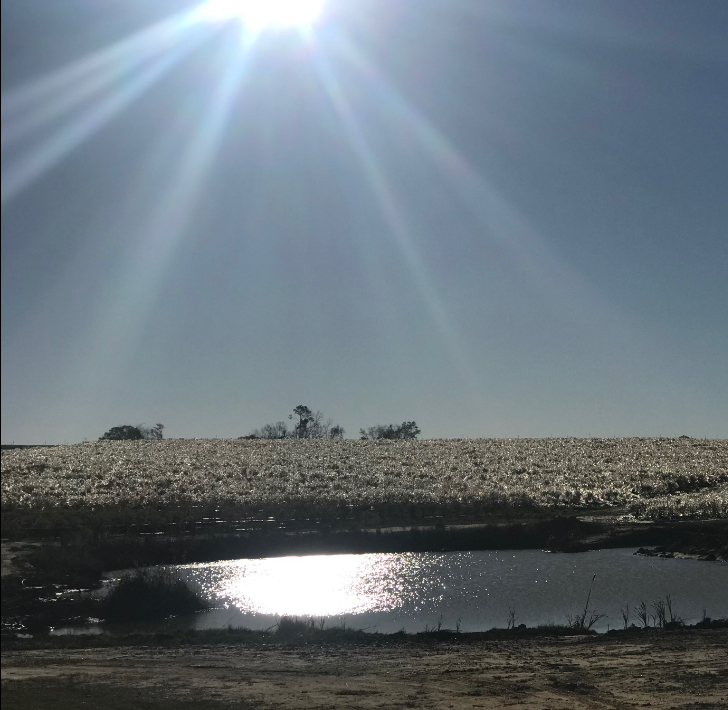 In the last few years, freezing temperature have hurt the state’s overall blueberry crop as these highbush have pollinated and produced a small berry that succumbs to cold injury. With cold weather this week our strawberries and blueberries had to have protection.

Cold is not the only factor to consider. Once blueberries start to form and we are starting to see petal fall, it takes less cold to hurt us. Blooms can take a little bit more cold, and our temperatures ended up being right around freezing and just a little below.

Many noticed Mrs. Beth was devising a system to bring water from the pond to cover the blueberries each night. I went out and took a look at what was going on and here are some pictures. 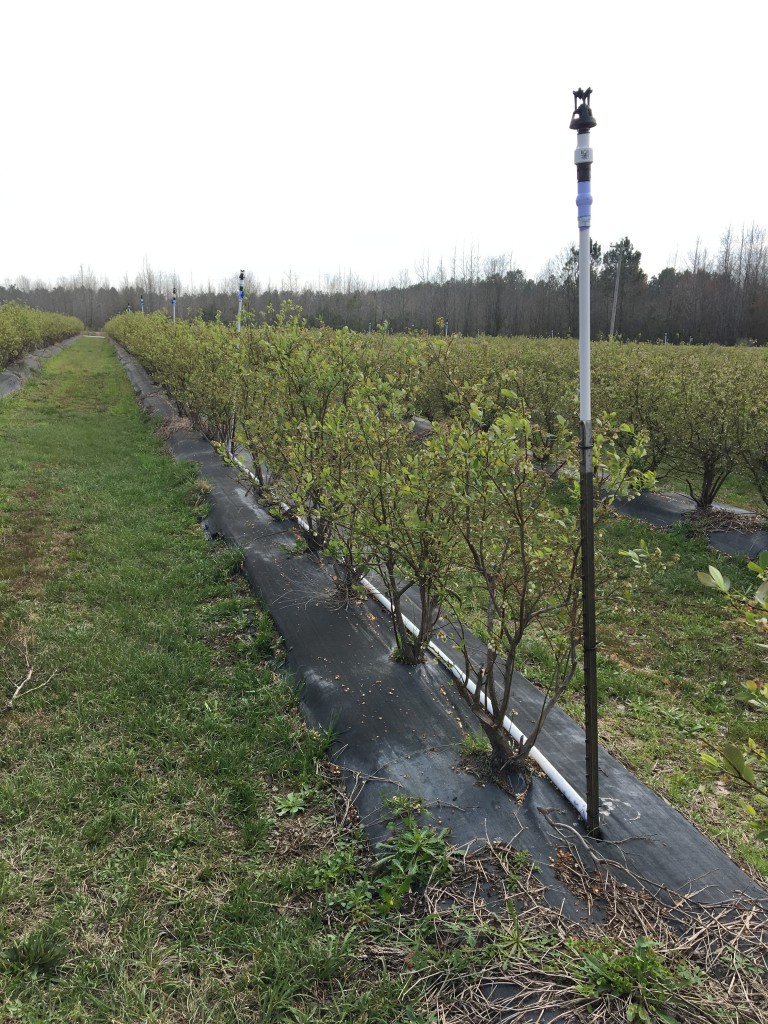 Star and Farthing varieties of highbush under ice. 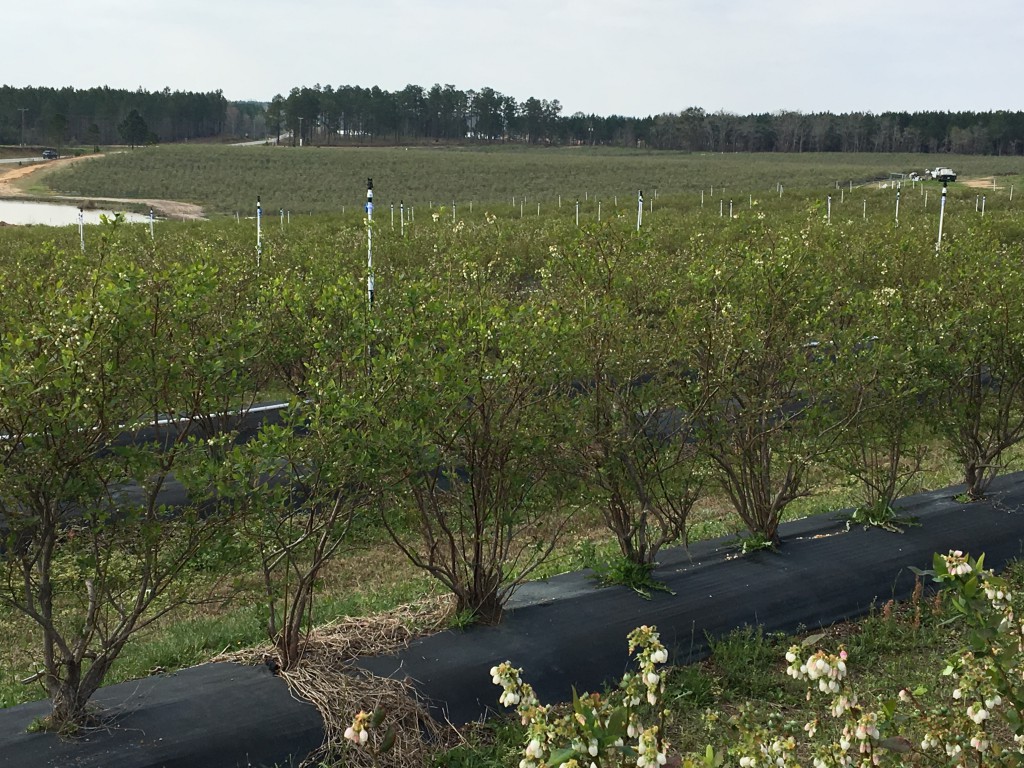 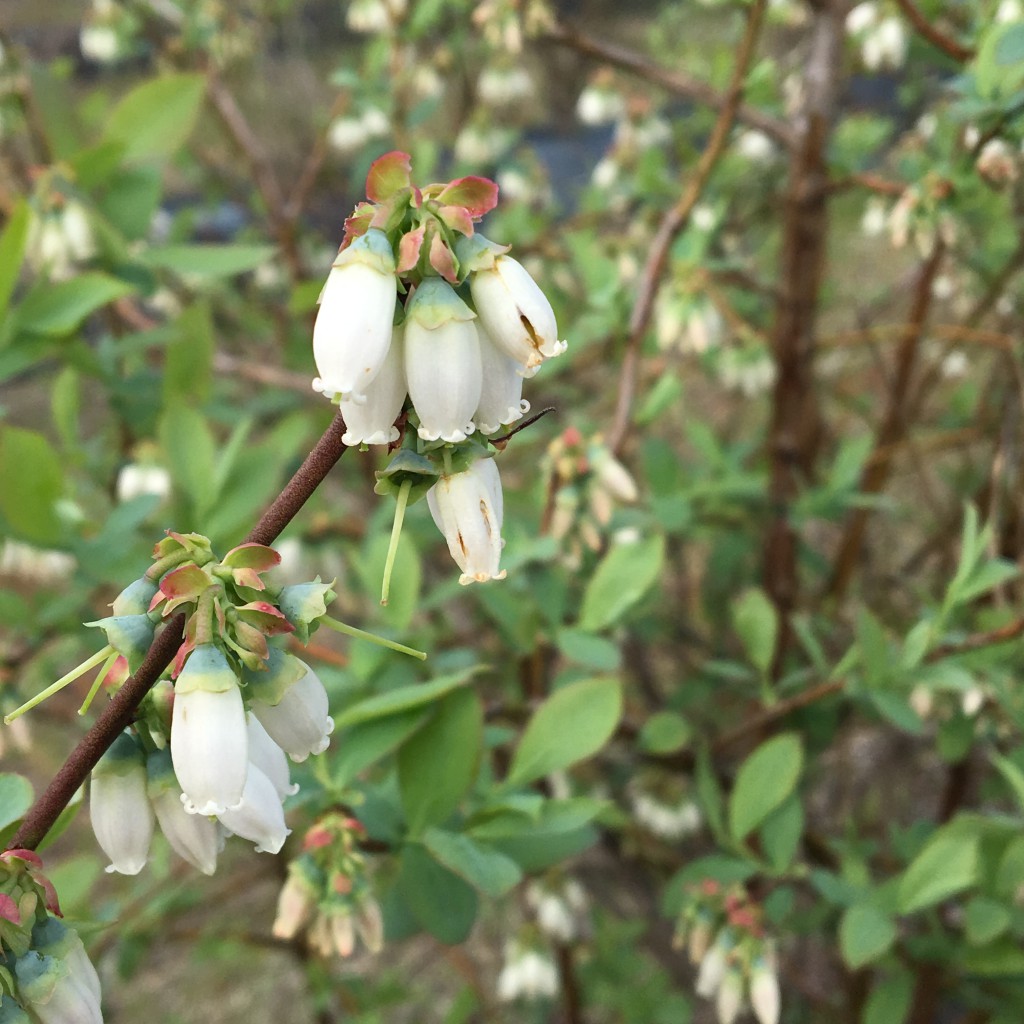 Rabbiteyes have bloomed out a little more than usual. We probably lost some blooms and some buds might be injured. However, we are confident there are no issues here. These are Alapaha and Brightwell varieties. 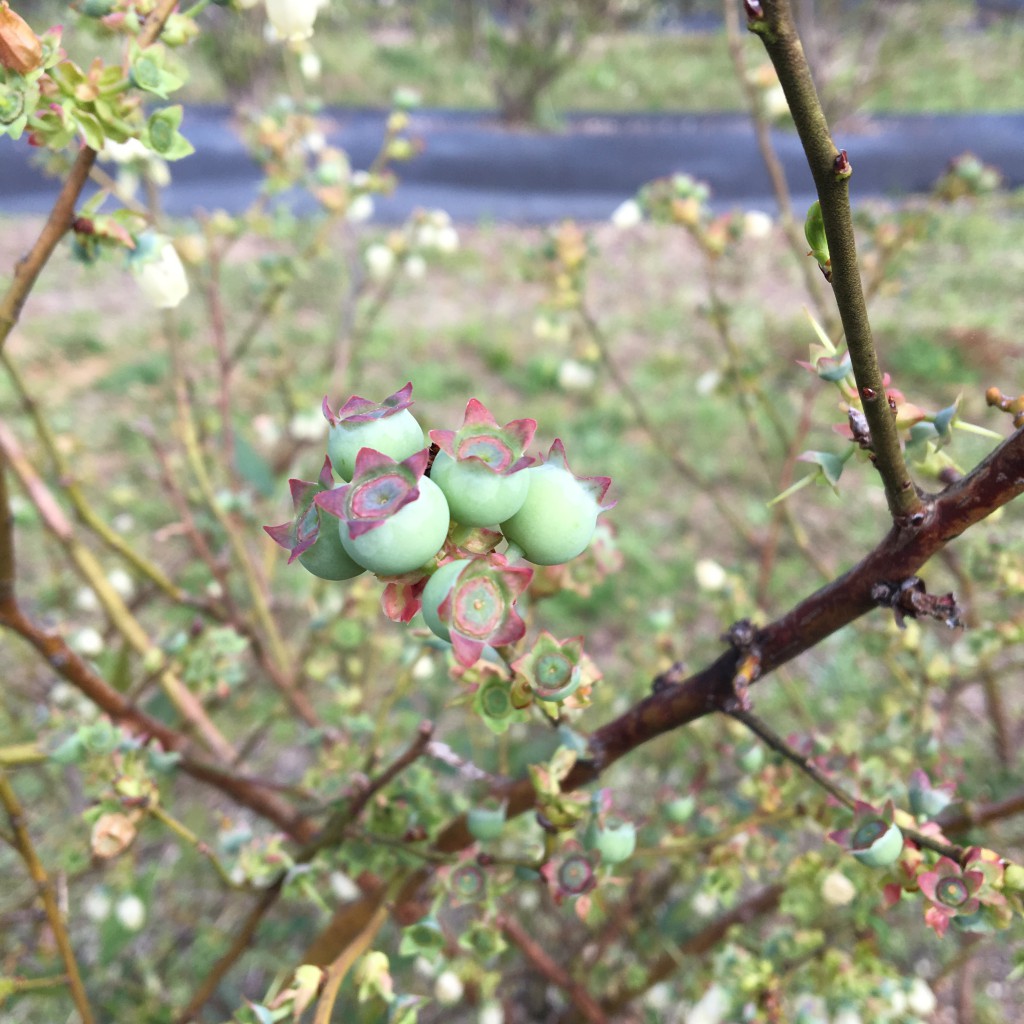 The irrigation was run on Wednesday and Thursday night. On Wednesday, it got down to 29 degrees. But we had about a 5mph wind. This helps the air temperature not be as low. The next night hit 31 degrees at around 6:00. There was no wind whatsoever. Mrs. Beth also has some highbush blueberries on a higher part of the hill and for this reason hopes some of the coldest air missed it.

It takes a good few days to really know the extent of freeze or cold damage. As of Monday afternoon, it looks like some of the highbush varieties are going to sustain some losses. The good news is that some varieties appear to have come out really well. The other good news is that the highbush varieties that appear to have a loss also are known for putting on some of a second crop. This will help us too. The rabbiteye varieties are fine. They bloomed a little more than usual for this time. Some buds and flowers were damaged but we aren’t worried about any issues with rabbiteye.

The tractors were running blowing air as well as the irrigation. Here are some pictures Mrs. Beth took each night. 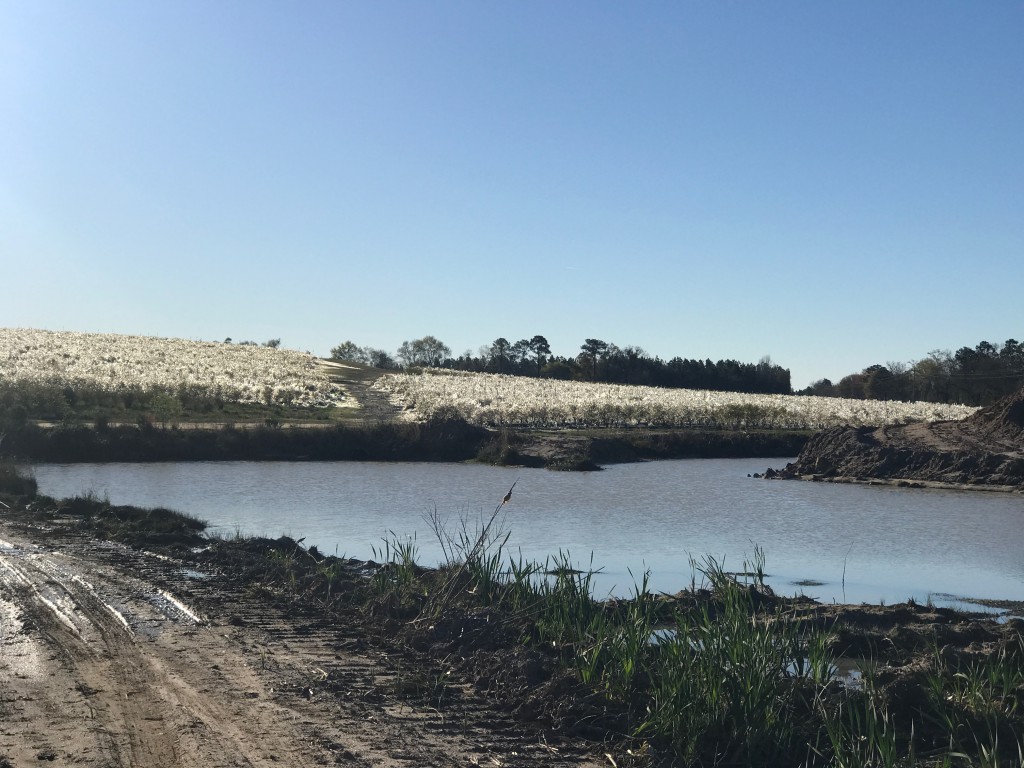 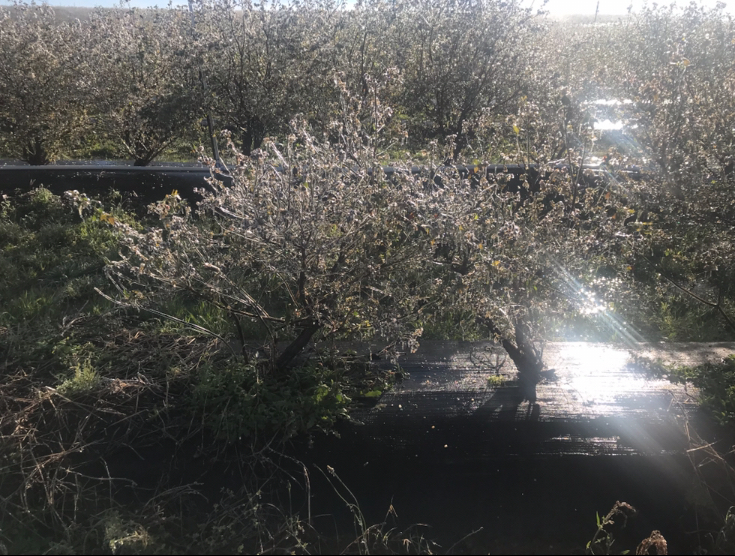 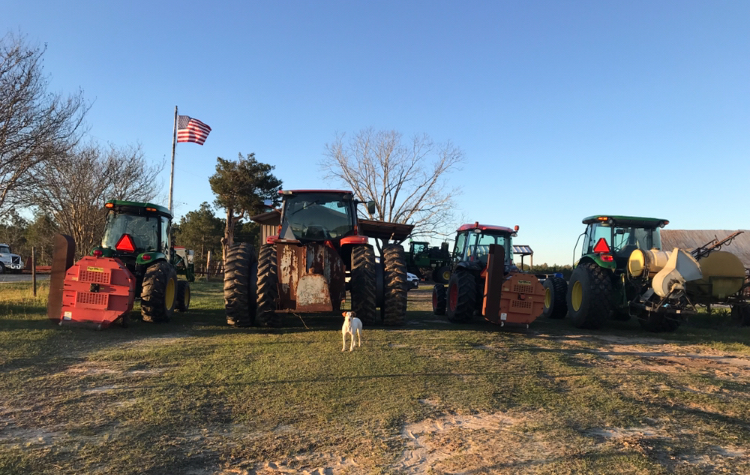