The worst thing we can do right now is add an insecticide just because we’re going over the field. I’ve looked a many cotton fields this week and am almost surprised to not see hits from stink bugs. I know there are some around, but pay attention to thresholds. Remember my post about peanut insects a few weeks ago? Lots of bugs in the field, but none at threshold. What we are seeing is lots of beneficial insects. This blog is photos I have taken over the years of some beneficial insects and what life stage to look for.

Not only do we need to pay attention to thresholds and beneficials, keep in mind that some insecticides flare certain insects. Whiteflies are showing up in Wilcox County. They are not at treatable thresholds now, but if we use Bidrin for stinkbugs, we will flare whiteflies. Also, this is the time for spider mites in cotton and peanuts. Though it has been wet and rainy, the use of pyrethroids will flare spidermites. Don’t use these insecticides unless needed. 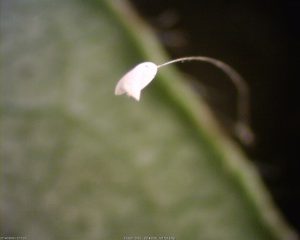 Green Lacewing – This maybe the most common beneficial we are seeing now. We saw many eggs of green lacewing in the cotton fields this week. There are many species of lacewings, but green is most common. The eggs are often found on plants and are easily recognized since they are attached to a long, slender silken stalk which holds them above the surface. The larvae are sometimes called “ant lions” and are predators. They eat many small insects as they grow ranging from leafhoppers, scale insects, mites and also aphids. I took the picture of an “ant lion” eating a sugarcane aphid on grain sorghum. 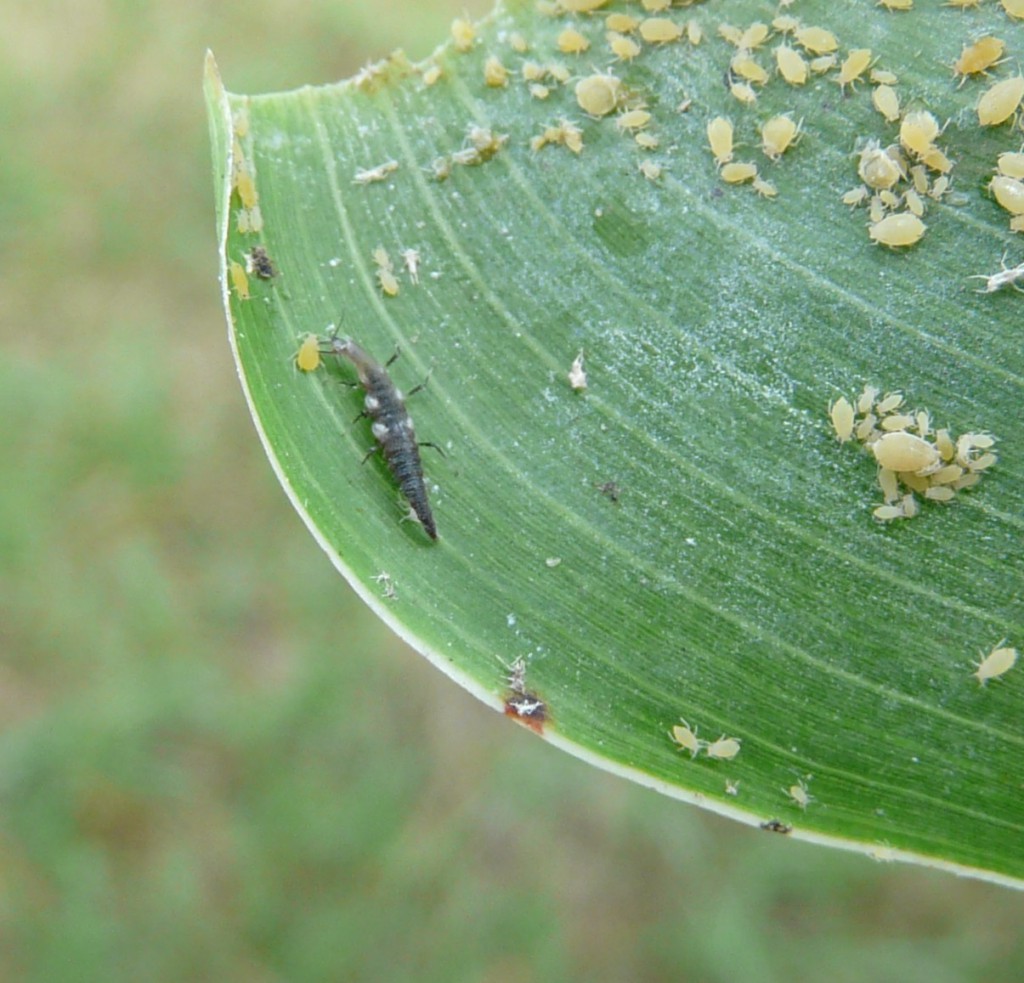 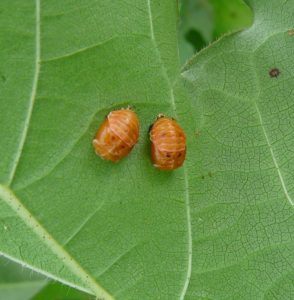 Lady Beetle – We are also seeing lots of lady beetles right now. Beetles have a complete lifecycle (egg, larvae, pupae, adult). Here is the larvae of a lady beetle (below). Larvae are usually carrot-shaped, warty and have well developed legs. The most commonly seen are the pink and convergent lady beetles. They are predatory and feed on a variety insects including mites, scales and aphids. To the right is the pupa stage under cotton leaves. 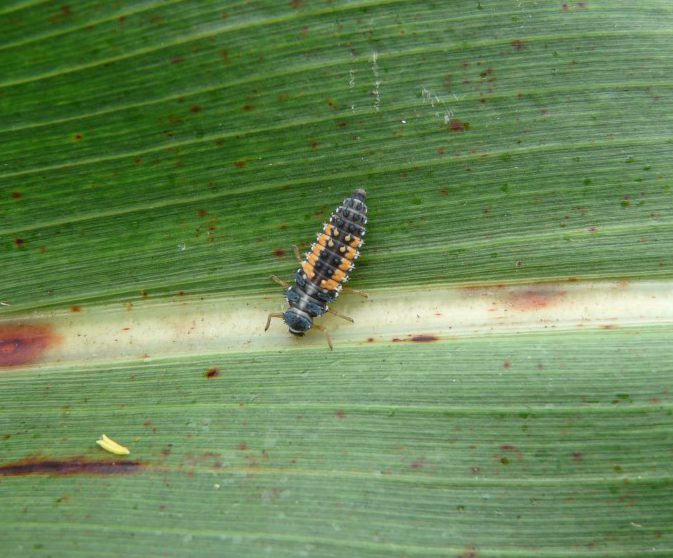 Spined Soldier Bug – Here is another beneficial to look for. Resembling stink bugs, this is a nymph from a spined soldier bug. They are a medium-sized predatory stink bug which preys on caterpillars and larvae of beetles. They can be hard to identify, especially at immature stage. If you see an instar that is red and black, those are younger instars. This is closer to a 5th instar where the wing pads are prominent, and the head and thorax become mottled with brown. The abdominal markings are white or tan, and black. Also, their mouthparts are larger than stink bugs’s mouthparts and are close to the width of the antennae. 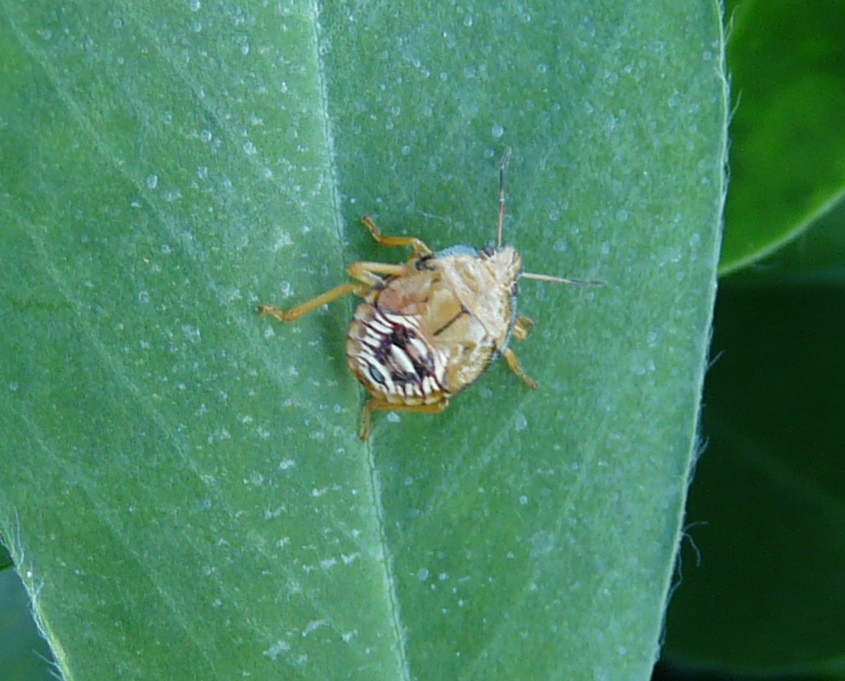 Minute Pirate Bug – I saw this pirate bug near a cotton square and looked like plant bug. Plant bug is actually in a different family, but share many similar characteristics. Pirate bugs are generalist predators. Adults and nymphs feed on insect eggs and small insects such as psyllids, thrips, mites, aphids, whiteflies, and small caterpillars. It was very difficult to get this picture, as you can barely see him. 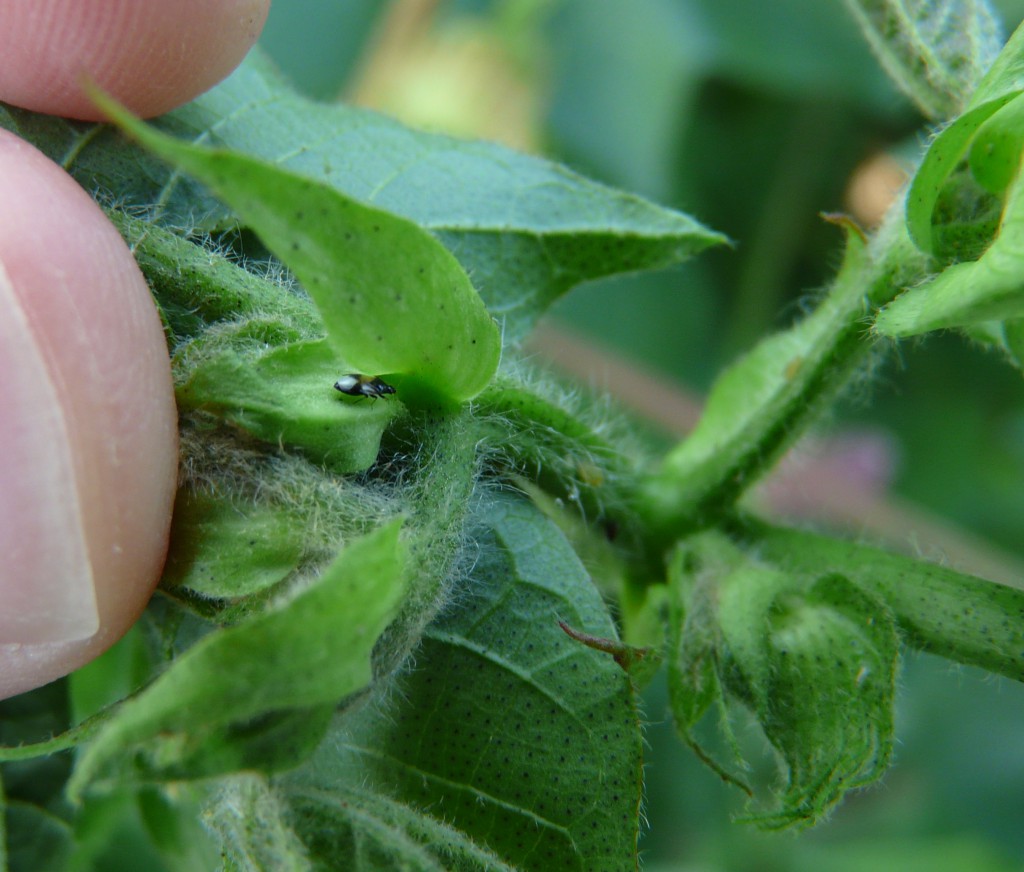 Braconid Wasp – In peanuts, we see what looks like ‘fuzzy rice’ on a few leaves. These are the cacoons of a pupating parasitoid wasps in the Braconidae family. These wasps are parasites of aphids and caterpillars. A female wasp can attack hundreds of aphids in a two week span. 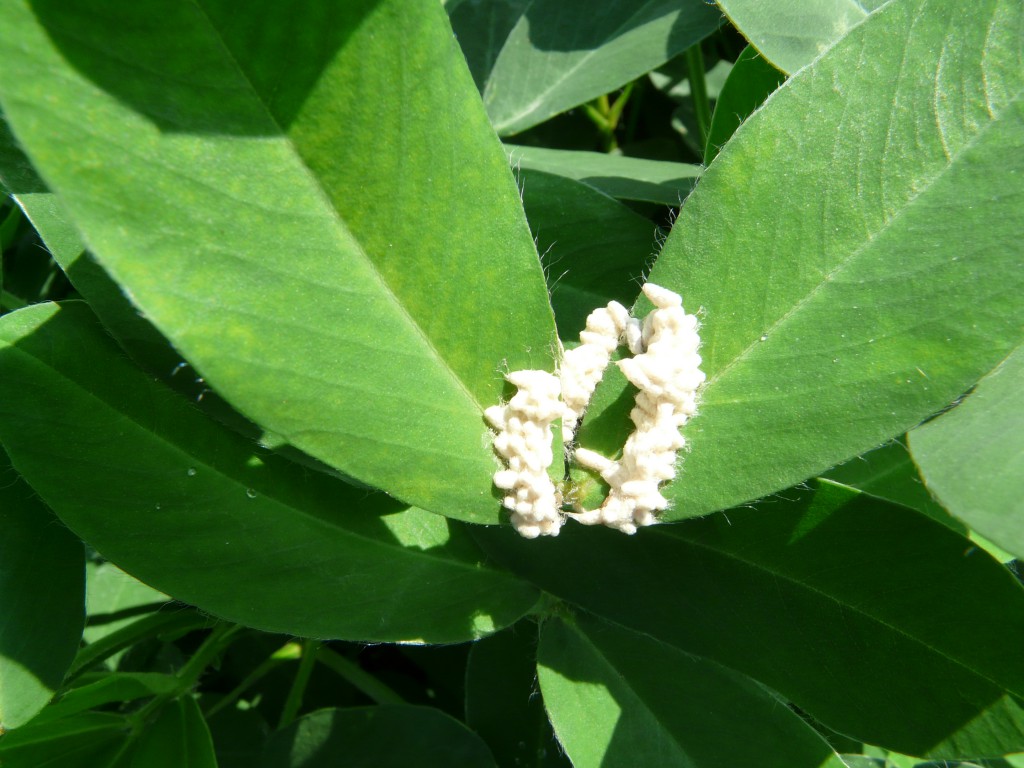 Assasin Bugs – Sometimes I will see some assissin bugs in my sweep net. They have a long beak which is used to inject an enzyme into their prey. They then suck the body fluids out. They are in the same group of “kissing bugs” (Assissin bugs, wheel bugs, damsel bugs, leaf-footed bugs). They feed on soft-bodied prey like mosquitoes, flies, cucumber beetles and caterpillars. The nymphs (immatures) have their abdomen point upward like in the photo below. 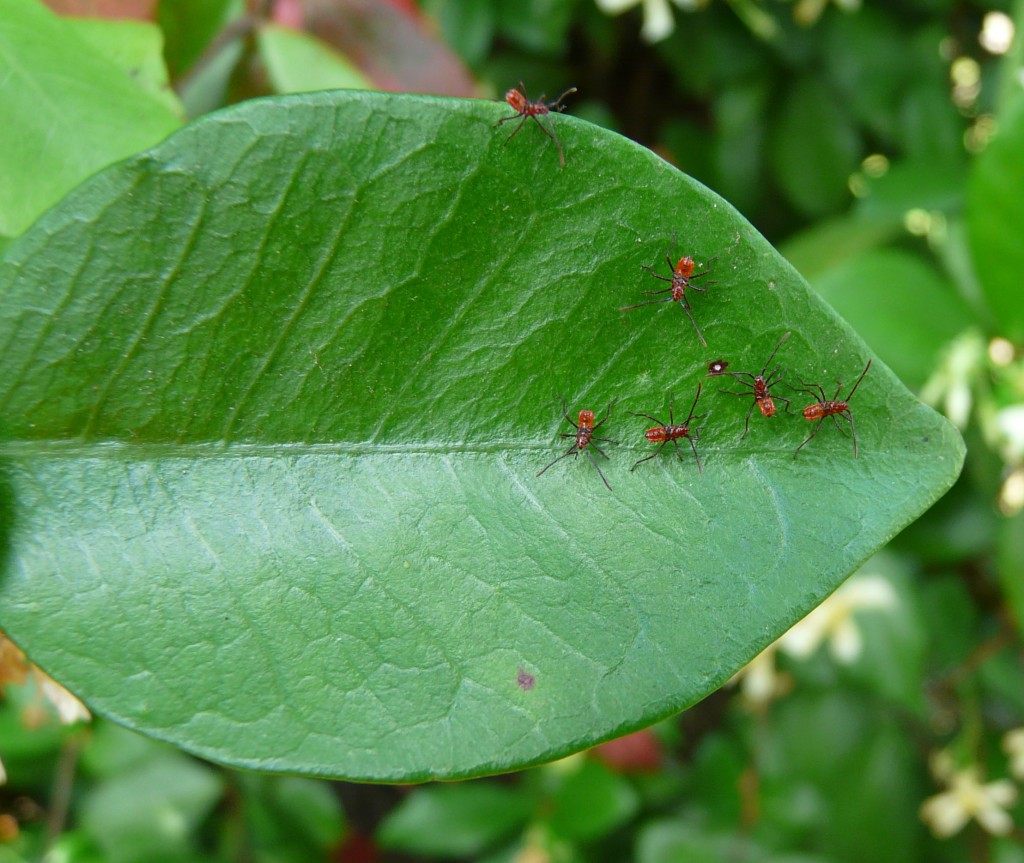