We are about 2 weeks into pecan budbreak and I had a question about some potential insect issues. In this post, i’m putting together some information on insects we may see now and what to do. 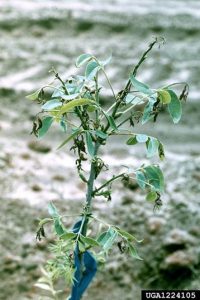 This is an insect we may see, but we almost NEVER worry about it. The pecan budmoths (Gretchina bolliana) resemble hickory shudworm moths and overwinter as an adult under bark scales. They complete a generation in about a month. Larvae feed in the buds and shoot apices causing multiple branching in the terminals and lateral branches. We only need to watch for them in trees that are 1 or 2 years old. We don’t need to do any preventative sprays for these. If you see them damaging a tree, they are not hard to control.

Pecan leaf phylloxera (Phylloxera notabilis) is an aphid-like insect that infects during budbreak. Their feeding causes abnormal growth of leaf tissues, and the tissue forms a gall that surrounds the insects. Once the galls form, no insecticide can penetrate to the insect. Phylloxera are more likely to be a problem, but ONLY in orchards where they build up OVER TIME. The only option is to treat with imidacloprid at BUDBREAK.

I did some work with phylloxera in Thomas County. We had many orchards that had phylloxera bad. What we tried to do was drench imidicloprid in December, January, February and March to see if we could get a good timing for control. The tree take up imidacloprid, and this could help us with our timing. Timing for budbreak is very difficult. We could never get a difference in any of our drenches. But it still taught us a lot about the treatment. 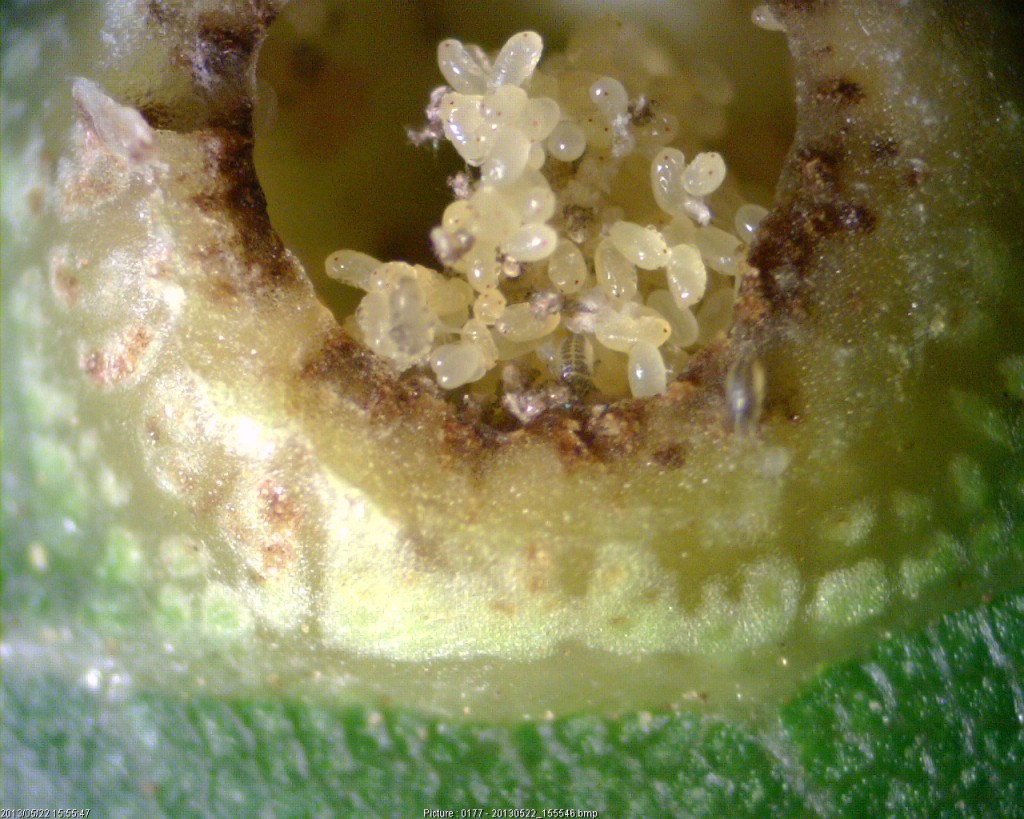 Phylloxera inside gall from a dissecting microscope 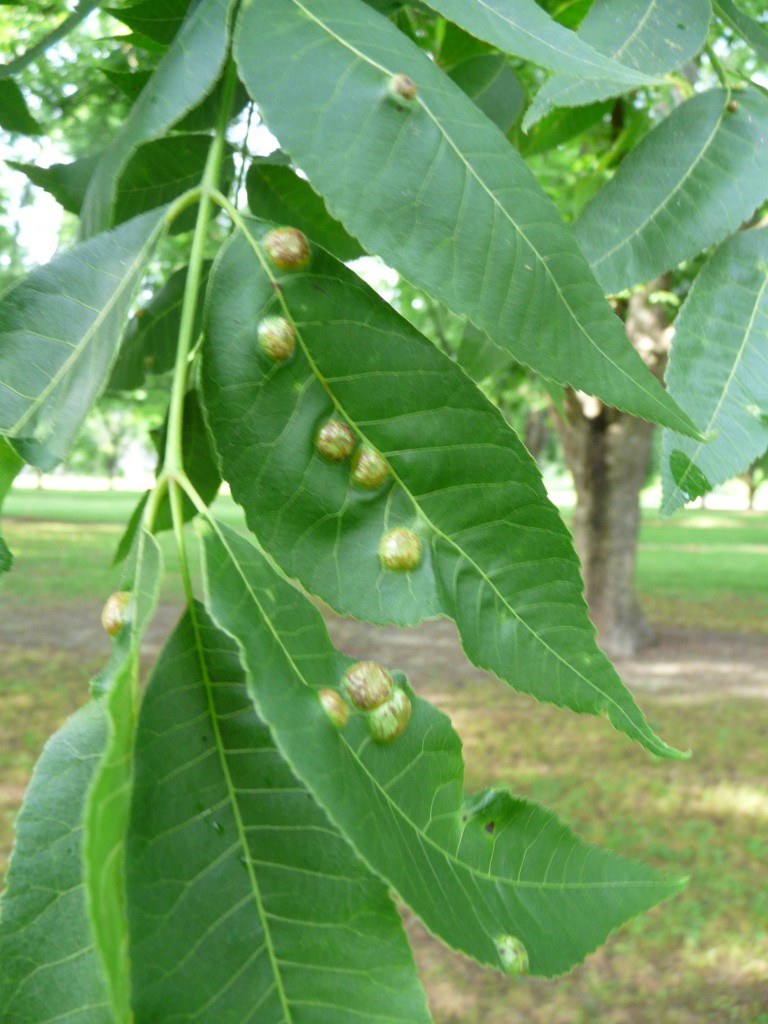 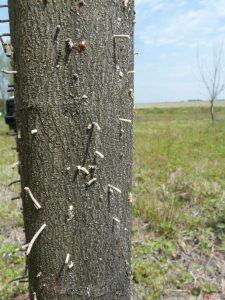 ‘Toothpicks’ are frass from Asian Ambrosia Beetle which marks an attack. This is on a young pecan tree.

Technically we should be done worrying about AAB when the flush is complete, so it usually dies down about this time. AAB are native and live in surrounding woods during the winter. Their first flight is usually late February. With an increase in pecans planted for production, these beetles have been attacking trees. They ONLY attack trees with no developed bark, usually less than 5 years old. We have been advising to make traps for AAB to moniter that first flight. Treatment is only a shotgun approach, meaning you spray those particular trees in the area. They were very active in 2015 and 2016.

This year, there wasn’t much activity this year in traps that I observed in Wilcox County. I don’t think they were that bad elsewhere. Cook County Agent Tucker Price and I noticed this and asked about spray intervals. UGA Exetension Pecan Entomologist Dr. Will Hudson provided some advise considering there are multiple species of AAB, and those species are host specific:

Typically, they are completely unpredictable. For nurseries, with lots of diversity of plant material, we recommended waiting to spray until something was hit, then spray that and nearby stock until the spring flush was complete. It was common for only one or two species to be attacked in any one year. The species hit changed year to year so they either had to spray everything or try to react to the situation that year. I think I would watch (pecans) and see if there are attacks in the pecan trees before I started spraying – assuming the grower is able to watch closely. Spraying based on trap hits might be insurance but it also might be unnecessary. Spraying once at the first toothpick and then watching for additional hits is probably what most pecan growers will do, and it’s not a bad plan.

Tucker and I did some work on AAB in 2016 where we painted AAB traps with white latex paint to see if the pain stopped the beetle. This was because some growers began painting the trucks of their trees after 2015 attack. We had no real difference in painted and non-painted traps, but there was numerical difference to say that when beetles had the choice they would go to a non-painted trap, but the pain definitely did not stop them. If you are interested, here is a poster we put together about it: 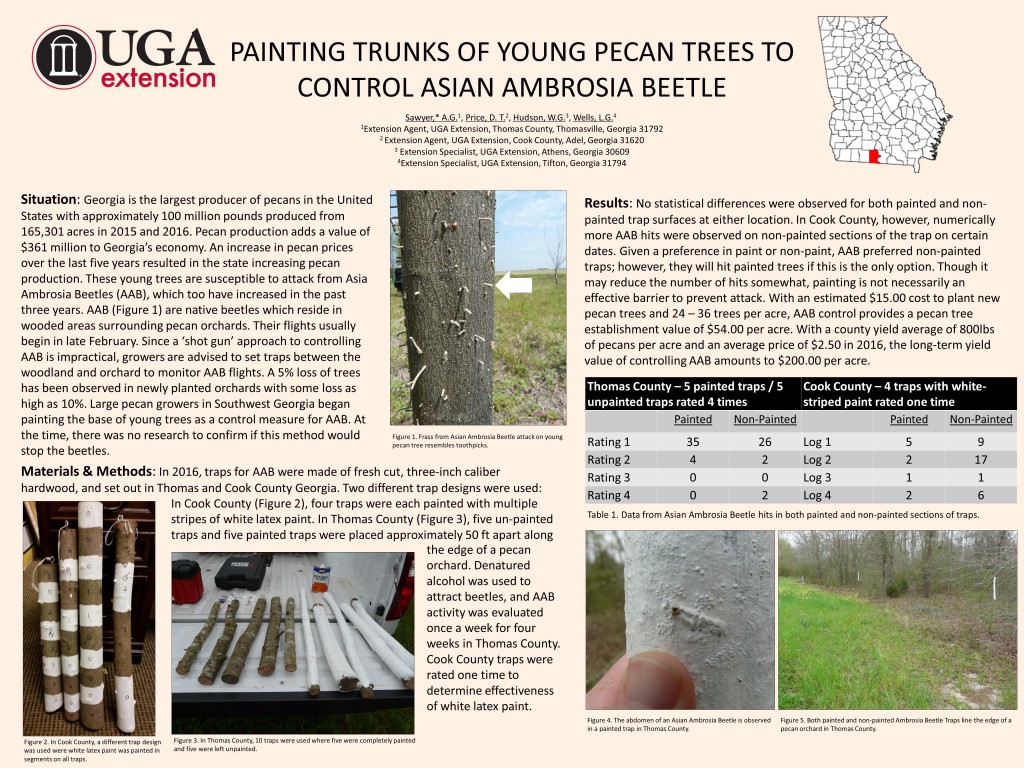