Recycling seems to be a part of everyday life for most Europeans.  I saw large recycling bins along the roads in Spain, France, Germany and Austria.  All of the containers I saw required people to separate their trash (i.e.  glass, paper, cans, etc.). Interestingly the university in Spain where the conference I attended was held did not have any recycling trash bins located on the campus, at least not any I could easily find.  In contrast, at the Mariastern Abbey outside Hohenweiler, Austria, they provided a trash can for “Biomüll” which is organic waste like fruit and veggie waste. Recycling seems to be a natural part of everyday life over here. People separate their trash and even walk or drive to large bins to drop it off.  According to the European Environment Agency, Austria, Germany and Belgium recycled the greatest amount of waste in Europe in 2010.  Austria recycles 63%, Germany (62%), and Belgium (58%). Close behind are the Netherlands (51%) and Switzerland (51%).  Approximately 35% of municipal waste in Europe was recycled in 2010, which represents a great improvement from 2001 when only 23% was recycled.  The EU-mandated target is for 50% of household waste to be recycled by 2020. 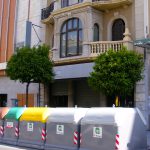 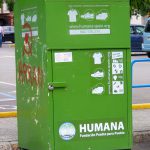 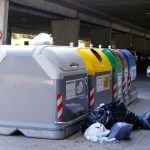 In the U.S. the recycling rate is also showing improvement.  In 2011, we generated about 250 million tons of trash and recycled and composted 34.7%, which is an improvement from 2000 when our recycling rate was 24.5%.  Many cities, like Athens, Georgia, have moved to single-stream recycling to increase the recycling rate.  People can put all types of recyclables into one container. It seems to be working.

There are many ways to look at recycling and how we can encourage people to reduce waste and recycle things they no longer need.  One solution doesn’t work in all countries.  We need to develop policies and initiatives designed with the people who live in that country in mind.  I think the key is to encourage people to “rethink” how they manage waste. Check out tips for reducing, reusing, and recycling on the UGA College of Family and Consumer Sciences Cooperative Extension webpage.