Wettest conditions along the coast this week

The rain this week is focused along the front which is currently draped across northern Florida and along the coast. Areas north of the front should see relatively light amounts of precipitation, while areas along and to the south of the front could see heavy rain and even some flash flooding. There is no strong signal with temperature one way or the other.

The National Hurricane Center is showing a 20 percent chance of some development along the front by the East Coast near South Carolina which could bring heavier rain to the Carolinas late in the week, although it should not affect most of the rest of the region.

Week 2 looks like it is leaning only slightly to wetter than normal conditions, while Weeks 3 and 4 (which cover the first two weeks of September) look to have a better chance of below normal rainfall. Of course, we are now in the most active part of the tropical season, so things could change if storms start developing in the Atlantic basin, but nothing other than the Carolina development is on the horizon so far. 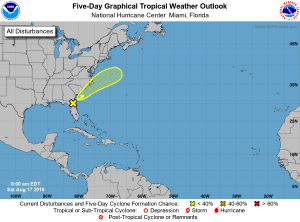