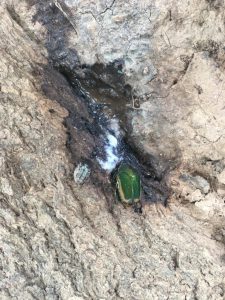 Question: There’s an old oak tree in my back yard with sap oozing out. During the summer, the sap was covered with bees and other insects. What’s causing this to happen and is this harmful to my tree?

Bacterial wetwood or “slime flux” is a condition in trees that is characterized by the bleeding of sap through an open wound in the bark. Symptoms may occur in the spring or fall when sap flows peak, and most commonly occurs to trees larger than 12” inches in diameter. Slime flux is usually preceded by some type of bark wound caused by a mechanical injury, wood split by freezing, wind or storm injury. Bacteria enter through old wounds above or below the soil line. Oaks, elms and maples are the species most often affected by slime flux, but certain softwoods are also susceptible.

The fluxing or oozing of sap is a result of bacterial activity at the wound site, which may be deep within the tree. The build-up of bacterial populations within the tree causes fermentation resulting in internal gas pressure of up to 60 pounds per square inch. As the bacteria grow, pressure is produced and has to be released to the outside. When this happens, sap oozing is evident on the outside of the tree. The sap may be clear and there is usually an alcoholic smell associated with the sap since the bacteria are literally fermenting inside the tree. As large numbers of dead bacteria begin to break down inside the water-soaked wood, the odor may become sour with time.

Foliage sometimes wilts and branches may dieback during the growing season. However, most of the time, bacterial wetwood is a minor problem that leaves a vertically streaked stain on the bark where pressurized sap escaped out of bark wounds. Secondary fungi, mold, and bacteria may grow within the surface liquid and create a slimy texture on the bark.

The sap that is released from the tree is full of natural sugars and fermented bacteria, which can also attract a variety of bees, wasps, yellow jackets, beetles, butterflies, and other insects. These insects feed on the sticky sugary sap, but should not cause any damage to the tree itself. People often blame these insects as the cause of the problem, but they are there secondarily. Therefore, these insects do not need to be controlled or sprayed.

Slime flux cannot be cured. Debate still exists among tree experts as to the treatment methods used for slime flux. Most experts feel the disease is not life threatening to the tree and therefore make no recommendations to control it. Fluxing usually diminishes after several years and shade tree owners should closely monitor the overall health of the tree for normal spring growth each year. Any symptoms of decline such as reduced growth or branch dieback should be further evaluated by a certified arborist, as this may be an indication of a more severe problem.

There are no known controls for bacterial wetwood. A 10% percent bleach solution may be used to clean stains off the bark if the appearance is an issue. For urban trees, maintaining vigorous, healthy growing conditions through proper fertilization, watering, mulching, and avoiding bark wounds will reduce the probability that trees will be affected by this disease. The good news is that, just because this problem exists, it does not mean that a tree is in jeopardy of dying. When possible, water trees during drought and do not let the trees go through any undue stress such as soil compaction from heavy equipment or other root disturbing activities. Conduct a soil test to determine soil fertility needs of mature trees.

Paul Pugliese is the Extension Coordinator and Agriculture & Natural Resources Agent for Bartow County Cooperative Extension, a partnership of The University of Georgia, The U.S. Department of Agriculture, and Bartow County. (770) 387-5142. For more information and free farm, lawn, or garden publications, visit our local website at www.caes.uga.edu/extension/bartow .