I would like to share with you, a vegetable alert I received this week from Hunt Sanders, Disease Management Specialist in UGA Department of Plant Pathology.  Most of you are aware that, Dr. David Langston former UGA Vegetable Plant Pathologist accepted a position with Virginia Tech.  So, in Dr. Langston’s absence, Hunt Sanders will be handling many of our disease management issues.  Mr. Sanders has worked with Dr. Langston for eight years and during this time has conducted the majority of vegetable disease field trials.

It is important to remember that most pathotypes of downy mildew will attack cucumber and this crop is usually the first cucurbit crop to display downy mildew symptoms.  This disease is most severe when rainfall is abundant but the disease can cause damage and spread with heavy dews in the morning.  As Mr. Sanders mentions below, it is imperative that we tank mix chlorothalonil or mancozeb with preventative fungicides such as Ranman and Zampro.  Also, please remember that the downy mildew pathogen can develop resistance to fungicide modes of action very rapidly.  We need to be sure to rotate Ranman and Zampro.  I have included pictures, from Dr. David Langston, of downy mildew on different cucurbits. 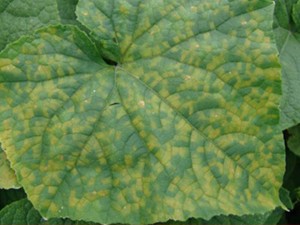 Based on what we are seeing in our cucumber trials this year, we may be experiencing some fungicide resistance problems in downy mildew of cucumber this fall.  Some Plots that have been sprayed with a Ranman/ Zampro rotation have a great deal more downy mildew in them than we are used to.  We are using an older cucumber variety in these trials with no downy mildew resistance, but we still should not be seeing the level of disease severity in these plots that we are seeing.  The trial in question is an industry trial with different fungicide rotations which makes it hard to determine which product (Ranman or Zampro) might be experiencing a problem.  We have initiated a follow up fungicide screening trial that will help clear up what we are currently seeing.  Results from the screening trial should be available in 3-4 weeks.  Until that time all we know is that we are seeing increased levels of downy mildew in plots that were sprayed with a Ranman/Zampro rotation.  I have been in contact with David about current downy mildew recommendations and we both want to stress how important it is to tank-mix products that contain mancozeb or chlorothalonil with the products Ranman or Zampro.  In the current environment it is critical that your growers tank-mix these products.  If you have a grower that experiences an outbreak of downy mildew that he cannot control with the current fungicide recommendations please contact me and I will investigate the situation. 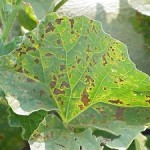 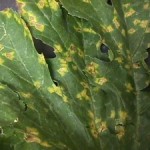 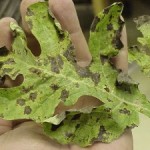 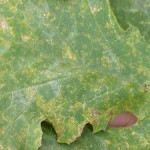