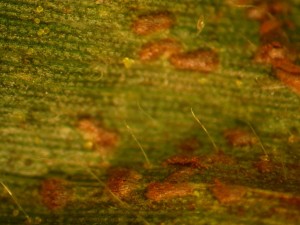 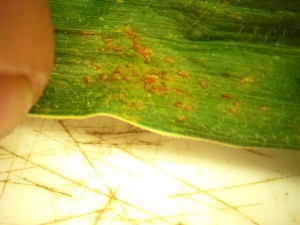 Several weeks ago I talked with many producers about the confirmation findings of Northern Corn Leaf Blight (NCLB) in South Georgia.  At that time, I remember stating several times that while we should be aware and scouting for NCLB at least it wasn’t as serious as a confirmation finding of Southern Rust.  However, we can no longer have that position because while we still have findings of NCLB we now have confirmed Southern Rust (much more serious). Southern Corn Rust has occured early this year and been reported in North Florida (just below Echols county line in FL), Ben Hill county (early tassel), Dooly county (V12 pre-tassel), and Early county (tassel growth stage).   It is important to remember that NCLB overwinters between corn crops in crop debris and that some level of NCLB will most likely occur each year.  But, Southern Corn Rust does not survive the winter and the arrival of Southern Corn Rust means that a fast moving pathogen has been introduced.  Southern Corn Rust is the most important disease in corn.  Dr. Kemerait suggests that NCLB is cause for increased scouting but Southern Corn Rust is reason to seriously evaluate spray schedule. We have more favorable conditions in near forecast for development of rust.  Rain is forecast for late weekend and early next week.  After much communication with Dr. Kemerait he indicates that it is safe to assume that Southern Rust is potentially present in any corn field in Southwest Georgia and it is likely to move North and East with passing storms.  It is recommended that growers stay on alert and consider the opportunity to protect their crops with a fungicide spray as it approaches tassel.  Evaluate your fungicide spray program and consider timely applications of fungicide for corn crop.  It is worth protecting crop from this disease if yield potential is there. Please keep in mind that corn needs to be protected from Southern Corn Rust until the dough stage.

If you spray Triazole fungicides (Tebucanazole) this is effective against rust but lacks broader activity against NCLB and only have 2 week protective window.  Strobilurin products and combination Strobilurin/triazole or Strobilurin/SDHI (Priaxor) have 3 week protective interval and broader spectrum of disease activity.

Southern rust sporulates only on top of leaf and the spores are orange. Much more serious.

Common rust has pustules on both the top and underside of leaf surfaces.  You will most likely find common rust on lower, older leaves.  Also, the spores for common rust are a darker orange (burnt orange color).  Most importantly, common rust is NO problem and will go away with warmer temperatures.