I recently posted an article about why pecans need more marketing. I found a perfect example of why marketing is important today. Below is a picture I took earlier when I went to a local grocery store and made my way to the snack section. There’s 20 different packages of almonds and not one package of pecans! As a pecan grower, this makes you sick! 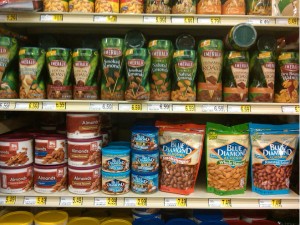 Do you know which nut has the highest amount of antioxidants per amount? The pecan! In moderation, the pecan has been known to reduce cholesterol and bad fat from the body by as much as 32%.

Another mineral component in pecans is zinc, which is important in producing testosterone in both males and females. Because of that, some actually claim it increases the same desires that oysters do. Now, I don’t know if that’s scientifically true or not. I do know that the main pecan harvest season is October, November and December, and If you look at statistics, the most popular months for babies to be born is September, August, June, and July, in that order. Those months pretty much fall nine months after pecan harvest, so it does make sense! Maybe there really is another benefit to eating pecans!