Prowl vs. Sonalan in Peanuts

Recent price increases in Sonalan 3EC (ethalfluralin) have many growers taking a closer look at the cheaper priced pendimethalin formulations (Generic Prowl 3.3EC and Prowl H2O 3.8ASC) for use in peanuts.  With the exception of use in reduced tillage systems (i.e. Prowl is preferred there), there have been no consistent differences in peanut tolerance and weed efficacy between Sonalan and Prowl in peanut (Table 1).  It has always been my position that I have no preference between these two herbicides and that every peanut acre in Georgia should be treated with one of them.  If a grower is trying to save a few bucks on input costs, there is no reason not to use a cheaper formulation. 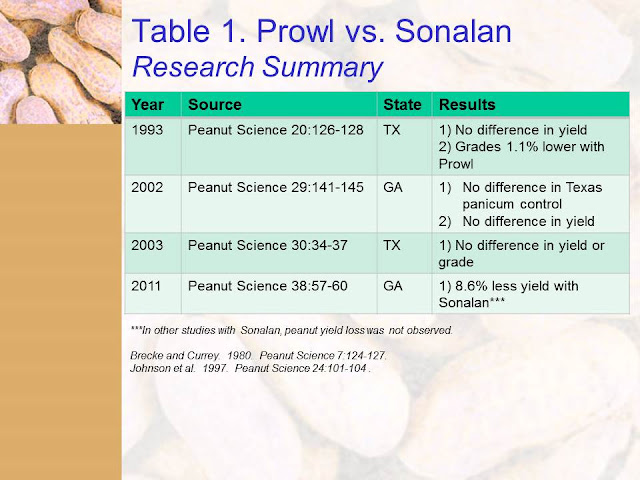 A couple of other comments about this issue:

1) The Weed Science Group at UGA has not been able to detect any major differences in the performance between Prowl 3.3EC and Prowl H20 3.8ASC.
2) The lb ai/A for each formulation are slightly different at the 1 qt/A typical use rate as follows:  Sonalan 3EC = 0.75 lb ai/A; Generic Prowl 3.3EC = 0.83 lb ai/A; and Prowl H2O 3.8ASC = 0.95 lb ai/A.  This might need to be considered when figuring the true cost differences per acre.