The United States Department of Agriculture (USDA) National Agricultural Statistics Service (NASS) released their Crop Production report on August 12, 2019. Their report forecasts 2019 harvested acres in Georgia at 590,000, down from 650,000 in 2018. The basis for this forecast comes from the Crop Acreage report on June 28, 2019 and a survey of plantings and planting intentions from early June. The NASS reported 2019 Georgia acres are 600,000 for peanuts. If in fact, 600,000 acres of peanuts were planted in 2019 in Georgia, this would represent a 10% decline from 2018 when 665,000 acres were planted. While initial forecasts are prone to error and actual behavior may differ from plantings, the current NASS estimates are substantially lower than what is seen in other available data. This has substantial implications for expected marketing for farmers as there are likely more peanut acres in Georgia headed to market this harvest than what is currently forecast by the USDA NASS.

The USDA Farm Service Agency (FSA) also reports acreage data based on producer self-reporting for participation in government programs including the Price Loss Coverage, Marketing Assistance Loans and Market Facilitation Program (trade assistance). On August 12, 2019, FSA reported acreage data as of August 1, 2019. FSA reports 663,000 acres of peanuts in Georgia. Thus, one must ask which number is best representative of the current peanut situation. 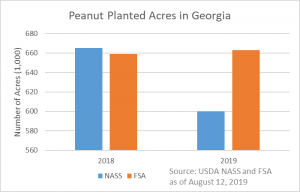 To help answer this question, let’s take a look back at prior years. In June of 2018, NASS reported 700,000 planted acres of peanuts. The August 2018 report indicated a forecast of 690,000 harvested acres. At the same time, FSA reported 657,000 planted acres with their first release of data in August 2018. Subsequently, FSA reported the final acreage for peanuts in 2018 was 659,000. Meanwhile, NASS ended with a planted acreage of 665,000. This discrepancy is rather common as NASS will update their forecasts and FSA will not include producers who do not report acreage since they do not participate in the government programs. Therefore, one expects FSA reported acres to be lower than actual planted acres and NASS estimates to improve throughout the season. Based on this reasoning, which is commonly seen during prior years, FSA acres would be expected to be lower than NASS acres. In other words, FSA acres can also be thought of as a minimum number of acres that were actually planted during a given year.

So, for 2019, we are left with NASS reporting 600,000 planted acres and 590,000 harvested acres. While FSA is reporting 663,000 planted acres. It is highly likely that the FSA reported acreage is closer to reality and the NASS figures need to be revised upwards by more than 10%. If this holds true, we are looking at planted acres in 2019 that are very similar to the number planted in 2018. Furthermore, production estimates need to also consider about 63,000 additional acres of peanuts planted in Georgia. NASS has forecast yields for Georgia at 4,400 pounds per acre. We expect this may also be a little high at this time, although we will save the debate on yield forecasts for another time. If for now we assume the NASS yield estimates, then an additional 138,600 tons of peanuts should be expected to be available this fall. In other words, there would have been no change in production between 2018 and 2019 in Georgia. Given the continued high levels of peanut stocks, this is not going to help prices during the current growing season and any expectation of rising prices due to lower acreage in Georgia should be tempered.