Caterpillars can often be garden pests throughout the summer, but many of the species we see in the fall have no effect on our crops.  In fact, some look like they popped right out of a surreal painting and turn into even more beautiful butterflies and moths. Though they may not affect our gardens, some do have the potential to cause harm to curious animals and humans alike that are not careful.

Two of the most striking caterpillars that many people have reported are the Imperial Moth caterpillar and Regal Moth caterpillar.  These species are very closely related and look pretty similar, but it is easy to tell the difference.  The caterpillar of the Imperial Moth can range from pale orange to bright green depending on the age. It has short yellow spikes on the front of its body that look like horns. It is also covered in long, fine hairs and has fluorescent yellow spots lining its side, and at this time of year, they range from 4 to 5 inches. The Regal Moth caterpillar is similarly striking, so much so that it is called a “Hickory Horned Devil.” These caterpillars can grow up to six inches. They are a bright blueish green and have large square spots on the front of their body that look like giant eyes. They also have bright orange horns just above these eyespots, and orange claspers at the back of the body that help them to grab onto branches.  Though they may look imposing with their horns, neither of these species is harmful to humans. 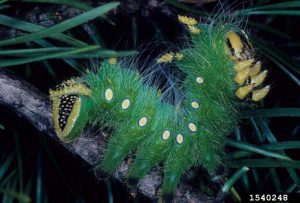 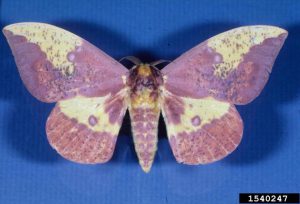 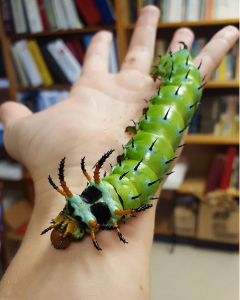 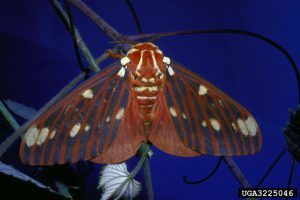 Orangestriped oak worms are small black caterpillars with orange lines down the sides of their bodies. They are covered in black spikes with the two closest to the head elongated like antennae. Oak worms will eventually grow into a small but beautiful pink, yellow and rust colored moth. As their name suggests, they are primarily found in large numbers on oak trees, though they will seldom harm a tree beyond eating some of the leaves. These caterpillars are also harmless to humans. 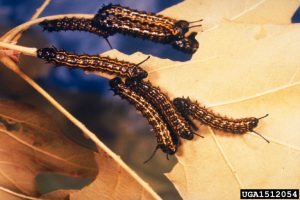 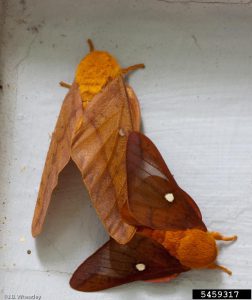 Two caterpillars are seen this time of year that actually can harm people and animals. The American Dagger Moth adult is a drab, unassuming mottled gray, but the caterpillar is fuzzy and yellow with thin black tufts of hair protruding from the front and back of its body. These hairs are similar to the fibers of a stinging nettle plant because they cause severe irritation when they come into contact with the skin. Some people may have less severe reactions than others, but contact with these critters will likely cause at least a slight rash. 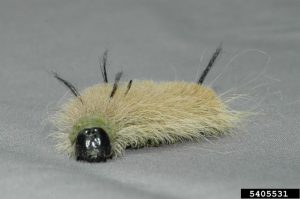 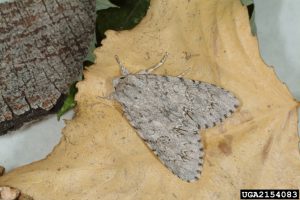 Saddleback caterpillars are short, stout caterpillars that are mostly lime green with some brownish gray spots. They get their name from the brown spot on their back that resembles a saddle. This species has venomous spines on the front and back of its body that can pierce the skin, and they often are found on the undersides of leaves. If you come into contact with either of these caterpillars, monitor the rash closely and see a doctor immediately if you begin to have severe reactions such as fever or trouble breathing. 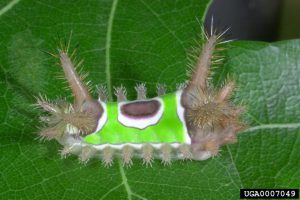 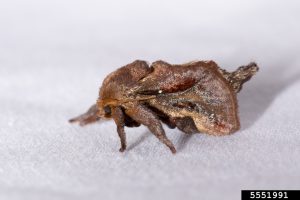