You may know a little about the asteroid that hit Mexico about 66 million years ago, leading to the death of many species including many dinosaurs. But scientists have been puzzled about whether it was the blast from the impact, a tsunami, or later cooling that killed them off.

A new study published this week provides a timeline of what was likely to have happened based on rock samples taken from several areas around the crater at Chicxulub. It points to both immediate deaths from the blast wave, widespread fires, and a tsunami that may have gone inland as far as Illinois and the lingering effects of a global cooling caused by massive amounts of sulfur dioxide gases that reflected sunlight back to space, reducing incoming radiation. It was estimated that the amount of aerosols was four times what Krakatoa put out in its eruption in 1883, and that cooled the earth 2.2 F for five years. You can read more here. 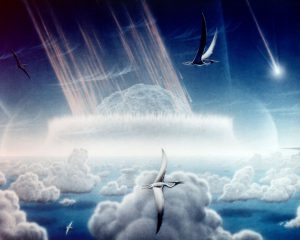