Sammy Fretwell of The State has published two related stories this week on the growth of very large farms which are replacing forests in South Carolina.  In one article it says that “In the past four years, out-of-state agribusinesses have purchased nearly 10,000 acres in the Edisto River basin, chopped down forests and established mega vegetable farms that today are sparking concerns about South Carolina’s ability to handle the expansion of industrial-scale agriculture.  The big crop-growing operations sucked up more than 2 billion gallons of water from rivers and aquifers last year, an amount greater than some local utilities used to supply drinking water.” Reportedly, the large farms have created relatively few jobs and have produced “nauseating odors, sputtering wells, bothersome crop dusting planes, polluted creeks and smoky skies.”

You can read more here: https://www.thestate.com/news/local/article146223014.html#storylink=cpy.  The second story at https://www.thestate.com/news/local/article146322939.html focuses on the loss of forests to create the large vegetable farms.
As the climate continues to warm, some vegetables which have formerly been grown in California may have to move to other regions due to lack of irrigation water in California as the water cycle there changes.  The Southeast is a prime target because it has relatively rich sources of water, although it has other problems like higher humidity that can produce more problems with diseases and pests than the dry California croplands.  I have heard that tracts of Georgia are already being bought up by out-of-state speculators who may try to do similar conversions of forest (Georgia is now 70% forested) to cropland in the future.  These croplands will compete with forests and natural habitats as well as urban areas for access to available water in the future.
Thanks to Mark Maguillicuty for posting these in the Facebook page for the Southern Region Extension Climate Academy. 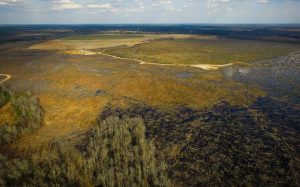