Corn:  Southern corn rust is now confirmed in 7 adjoining fields in Baker County.  I don’t think it is a coincidence that we are finding it now; development is following the rain periods of recent weeks.  I expect (stay tuned) to have more identified very soon.  Bottom line:  I think that the amount of southern rust is fairly low in the state right now, but that could change fairly quickly.  Wind and more wind yesterday and rains certainly were PERFECT for moving spores.

IF YOU THINK YOU FIND SOUTHERN RUST, PLEASE LET US KNOW

Peanuts:  We are in a combat situation I believe now with white mold.  I am getting pictures of young plants that are affected.  Very warm soil temperatures followed by moisture followed now by hot temperatures creates PERFECT white mold conditions (southern stem rot, Nickie).  Typing this at 7:30 AM, it is already 79 degrees and 100% humidity.  I can almost hear the white mold…..

Recommendations:  Now is not the time to be timid on white mold control.  The weather is here, teh crop is developing, protect the crop with fungicides from leaf spot and white mold.

Cotton:  No target spot or areolate mildew, but conditions are favorable.  Please advise your growers to pay attention and scout.  FIRST BLOOM is an important time to check your crop for target spot.  Even if you don’t spray, be aware.  Also, keep your eyes open for reddened, stunted, distorted plants that COULD be our new viral disease.  If you find plants like that, please let me know so we can check them out.

Soybeans:  Asian soybean rust is present in kudzu across the Coastal Plain.  Conditions (windy and passing storms) are PERFECT for moving it to soybeans.  IF THEY WERE MY BEANS, I WOULD DEFINITELY APPLY A FUNGICIDE BY R3, POD SET STAGE, especially if I was putting out dimilin and boron, and even if I wasn’t.  GOOD INSURANCE.

Been getting a few calls about controlling volunteer peanuts in field corn.  Remember that the volunteer peanuts that emerge from seeds that made it thru the winter and rains are some super tough plants.  A couple of thoughts:

Roundup Ready Corn:  Split applications of glyphosate at least 10 days apart.  Glyphosate can be applied over-the-top of field corn up to V8 stage or 30″ whichever comes first.  Drop nozzles or lay-by applicator should be used when corn is 30″ to 48″ tall.

Liberty-Link Corn: Split applications of Liberty (glufosinate) at least 7 days apart.  Liberty can be applied over-the-top up to V6 stage of growth.  For corn 24″ to 36″ tall, apply with drop nozzles or lay-by rig.

Conventional Corn:  Split applications of dicamba @ 0.25 lb ae/A applied EPOST (8″ tall corn) + lay-by (up to 36″ tall corn).  These dicamba applications must be separated by at least 14 days.   An alternative treatment would be dicamba (EPOST) followed by Evik (lay-by).

**Atrazine can also be included in any of these EPOST applications as long as corn is < 12″ tall.

DISEASES of PEANUT:  White mold and leaf spot aren’t breaking lose in every peanut field in Georgia, BUT hot temperatures, high humidity and frequent rains have created near-perfect conditions for the development, spread and, sometimes, explosion of these diseases.  Growers need to stay on a good fungicide program, tightening spray intervals where disease is becoming problematic and/or where there is concern if the crops have received enough drying time after a fungicide was applied.

What a season it has become when target spot and areolate mildew are causing greater angst than bacterial blight.

Centynal EC. This is a good product for treating empty bins and elevator boots.  Note that the active ingredient in Centynal EC, Defense SC and Suspend SC are identical.

Defense SC (labeled for empty bin use only).  This is a good product for treating empty bins and elevator boots, but is not labeled for application directly to grain.  Note that the active ingredient in Centynal EC, Defense SC and Suspend SC are identical.

Suspend SC. This is a good product for treating empty bins and elevator boots.  Note that the active ingredient in Centynal EC, Defense SC and Suspend SC are identical.

Tempo SC (labeled for empty bin use only). Tempo is a good product for treating empty bins and elevator boots, but is not labeled for application directly to grain.

Actellic 5E. This product has long been the standard for use on corn and grain sorghum. A full rate will provide protection from weevils for 9-12 months.  Reducing the rate will decrease the longevity of the protection.  UGA data suggest that Actellic is susceptible to heat degradation in the drier when grain temperatures exceed 120 F.

Centynal EC.  Centynal EC is a new formulation that will provide 3 to 6 months of protection from weevils.  This material is heat stable in the drier (tested up to 150 F).

Diacon IGR.  Diacon IGR is an insect growth regulator that is effective for killing nearly all immature grain moths and beetles, except weevils.  The 4 oz per 1000 bu rate is sufficient for tank mixing.

Diacon IGR PLUS. This product is a premix of Centynal EC and Diacon IGR.

Malathion. Although widely used in the past, this product is no longer recommended due to well documented resistance in many stored grain insect populations. Expect malathion to break down in the drier.

Sensat. This product is new to the market, but has been in our evaluation program for several years.  Test results show excellent weevil control for up to 12 months.  No dryer stability data at this time.

Storcide II. Storcide II is labeled for use on wheat and grain sorghum, but not corn.  Protection will degrade with heat and time.

Suspend SC.  This product is an older formulation that must be completely suspended before measuring and requires frequent agitation.  It provides 3 to 6 months of protection from weevils.

1000 bu will provide 6-9 months of protection from weevils.  This is a moderately priced option for growers in markets where other products are unavailable or cost is a limiting factor.

Regardless of the product used, be mindful that grain protectants are not a silver bullet.  Shelled corn should be dried to a maximum of 15.5% moisture content before dropping into the storage bin and must be immediately aerated to further reduce moisture content. Chemical applications should only be made to clean grain that will be stored for more than 3 months.  Apply protectants at the bottom of the auger in a course spray to maximize coverage as the kernels are moving up

to the top of the bin.  Long-term grain storage requires moisture content below 14%, proper housekeeping, use of a spreader when filling bins, and managed aeration.

Additional information is available in the 2018 Georgia Pest Management Handbook or in a recent Extension Publication (https://www.aces.edu/pubs/docs/I/IPM-0330/IPM-0330.pdf) that was published with colleagues at Auburn University.

The Impacts of China Trade Tariff on Georgia Row Crops

China announced plans to implement a 25 percent increase in import tariffs on major agricultural commodities from the United States, which includes soybeans, corn and corn products, wheat, sorghum, cotton, and tobacco and tobacco products. The overall United States export value for these agricultural commodities to China are worth around 44.7 billion dollars (USDA FAS, 2018a).

The Chinese tariffs, if implemented, will increase the United States agricultural prices faced by the Chinese consumers relative to other countries. Thus, it will reduce demand for United States agricultural commodities by Chinese consumers. As a result, the United States needs to find alternative foreign markets to export its excess supply in order to sustain current prices. China is the largest importing country for sorghum and soybean (USDA FAS, 2018b). Developing alternative markets for these commodities might be difficult. Although much of the soybeans going to the European Union typically come from Brazil, the European Union (import 14.8% of soybean traded globally) can serve as an alternative market for United States soybeans. Globally, it is a very competitive supply market for soybeans. China could diversify its suppliers in the long run and purchase more soybeans from Brazil (export 39.8% of soybean traded globally) and Argentina (export 17.0% of soybean traded globally) (USDA FAS, 2018b). In the short run, there will not be enough capacity for these countries to increase their production acres. China will still need to buy American soybeans and sorghum to satisfy their domestic consumption.

China is the third largest importing country for cotton, importing 13.1% of cotton traded globally in 2017 (USDA FAS, 2018b). If the Chinese tariffs on U.S. cotton are put into effect, it might provide a near term opportunity for global cotton suppliers like India, Australia, and Brazil to supply more cotton to China. However, the longer term situation could involve more of a re-routing of U.S. exports to other cotton importing countries, like Vietnam, Bangladesh, Indonesia, Pakistan, and India, than a reduction in U.S. cotton production. Recent history of the change in China’s internal cotton policy has shown that the disruptions of Chinese raw cotton imports stimulates the importing of duty free yarn from countries like Vietnam, Indonesia, and the Indian subcontinent (J.R.C. Robinson, personal communication, April 2018; Shurley, 2018).

The potential 25 percent increment in tariff for corn, cotton, sorghum, soybeans, and wheat could have a negative impact to Georgia’s agricultural industry. Cotton is the largest crop produced in Georgia with more than 1.27 million acres harvested last year, and contributes $794 million to Georgia’s economy (Table 2). Georgia produced 10.6% (2.25 million bales) of the total United States cotton production in 2017, and is the second largest cotton producing state after Texas. It is also the second largest cotton export state after Texas. Last year, Georgia exported $441 million of cotton, of which $26 million of cotton was exported to China (USDA FAS, 2018a). The Chinese tariffs will have a direct impact on the cotton exported from Georgia because tariffs will impact the entire United States cotton market and the prices received by every United States cotton farmer. It will also have an indirect impact through the prices received by Georgia cotton farmers. Even though Georgia does not export corn, sorghum, soybean, and wheat directly to China, the lower price of these commodities due to Chinese tariffs would impact Georgia farmers.

We will be having our last production meeting on March 8th at noon. Dr. Eric Prostko, extension weed specialist, will be speaking about row crop weed control. Please call the office to RSVP.

Stink bugs are the main pest to be scouting for right now. Also be looking out for spider mites and whiteflies. These insects are important when deciding on an insecticide to spray. A good phone app to help with insecticide choice is the GA Cotton Insect Advisor App. Bacterial blight has been reported in some counties.

The main diseases to be looking out for are white mold and peanut rust.

Below is a guide to soybean scouting that has ways to identify caterpillars in soybeans and also thresholds for foliage and pod feeders.

Please feel free to call the office with any questions. 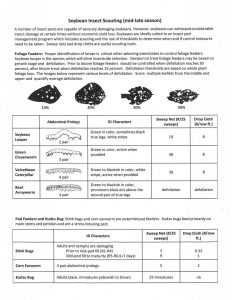