US corn yields get boost from a global warming ‘hole’

Physics Today reported this week that due to the warming hole which is seen in the central US, corn yields there are higher than they would be if that area had warmed as much as the rest of the United States. The cooler temperatures improved corn’s performance there. One thing the article did not address was whether growing all that corn actually contributed to the cooler temperatures by evapotranspiration from the corn, but I think that would be an interesting question. You can read more at https://phys.org/news/2019-10-corn-yields-boost-global-hole.html. 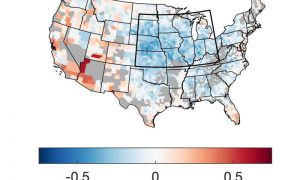 U.S. map of growing season average temperature from 1930 to 2011 over agricultural land with a box drawn around the Corn Belt. Growing season based on USDA planting and harvesting data, and runs approximately from early May to September. Credit: Trevor F. Partridge.