The devastating floods of Hurricane Camille

This week marks the 50th anniversary of the landfall of Hurricane Camille, which came ashore in Mississippi in August 1969 with wind speeds of as much as 185 mph and a storm surge that rivaled Hurricane Katrina in 2005, causing a lot of damage along the coast. Fewer people remember that Camille caused a second disaster in Nelson County, Virginia, where as much as 30 inches of rain fell in about 8 hours, leading to horrific flooding that killed 125 people. The hurricane merged with a front and concentrated the rainfall in that area, barely seen by National Weather Service radar that just scanned the top of the clouds due to the long distance from the radar site, so no warnings were issued when the flood began. The Roanoke Times has a compelling story which describes the storm and its aftermath here. The Washington Post also posted a story here. 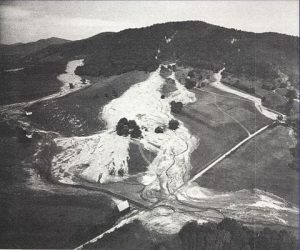