If you have ever watched “The Day After Tomorrow” movie starring Dennis Quaid, you might have noticed early in the movie that climate scientist Quaid notes that the North Atlantic Ocean Current is slowing down, which helped lead to the climate crisis depicted in the movie. While most of the climate science in the movie was bad enough that even my 8-year-old son could tell me what was wrong with it, this is one of the rare parts of the movie that was essentially correct.  Ocean scientists have noticed that this global circulation is running the slowest it has in the last 1,600 years, and that slow-down has important implications for both energy transport from the tropics to the poles and to sea level rise along the edges of the Atlantic Ocean, including our East Coast.

Climate Central has a good video which shows the ocean current system and relates it to the persistent cold spot in global temperatures off the east coast of Greenland here.

Earth Maven relates the slow-down to the rise of sea levels along the US East Coast, along with increases in melt water from ice sheets and land subsidence along parts of the region due to the end of the last Ice Age and groundwater withdrawals by thirsty cities here. 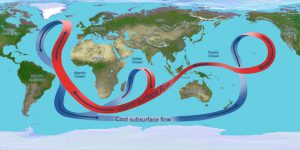