El Niño has been strongly affecting the climate of the Southeast for the past few months, leading to our current wet conditions.  While temperatures in December were much warmer than expected for an El Niño winter, since then the Southeast has cooled down to more normal values.  Cloudiness this year has also been an issue as the storms move through the region every three or four days.

Normally this time of the winter is when the peak of El Niño occurs.  Climatologists have been watching to see when it starts its inevitable decay.  EarthSky posted a story online yesterday discussing the current status of El Niño here.  They point out that even though the peak warming of El Niño has appeared to come and go, a second peak is certainly possible and that there will be plenty of El Niño conditions still to come, even if it begins to decay.

However, the latest forecasts for El Niño from the International Research Institute for Climate and Society (IRI) at Columbia University show that the likelihood of a rapid switch from El Niño to La Niña once it does decay has accelerated in the last two weeks.  Where scientists were originally expecting a slower transition from one to the other, the latest models now indicate that the transition could be relatively quick and by late summer La Niña could already be established.  This was discussed in an AgWeb article here earlier this week.

What does this mean for the coming summer?  Jim Angel, the Illinois State Climatologist, discussed this in his blog today.  While many of his remarks are aimed at the Midwest, the general discussion shows that drought is more likely in both the Midwest and the Southeast this coming summer, especially later in the season when La Niña is likely to be more dominant. 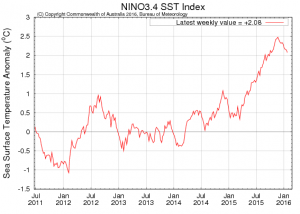