The Washington Post issued a story yesterday discussing the nearly nine year drought in hurricanes hitting Florida and why it might portend danger for Florida residents.  They pointed out that more than a million people have moved to Florida since the last hurricane hit in 2005 and that many of these people have no experience with hurricanes.  The situation is particularly bad in south Florida, where they have not had a direct hit from a major hurricane since Andrew in 1992.

Meanwhile, the active Eastern Pacific hurricane season has served up another slug of moisture to the Southwest.  The moisture from Simon is expected to bring copious rain to Arizona in the next couple of days.  Where will it go after that?  Most likely it will be sucked into the frontal system that stretches from Kansas through the Ohio River Valley, to the north of us here in the Southeast.   The 7-day QPF forecast shows that a wide band of heavy rain could occur in this area over the next week.  The regions of the Southwest most likely to be affected by this moisture are in far north Alabama and Georgia and western NC and SC. 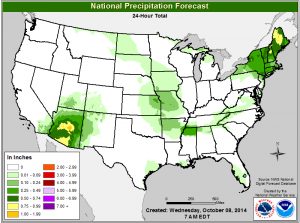 Meanwhile, the quiet Atlantic tropical season continues, although some models are suggesting some signs of storm development in the next week or so.  Not clear if this will have any impacts on the Southeast at this time.