Many of us in the Southeast have been enjoying the unusually warm weather we’ve had for the past few days.  In fact, Macon tied their record high of 88 F today (old record was in 1919) and Savannah and Augusta broke their records with 90 F observed today at both locations.  This marks the latest date on which Savannah had a high temperature of 90 F according to the National Weather Service.  Augusta also had a daily temperature range of 49 degrees, just three off the record of 52 degrees set on April 25, 1986 (thanks to William Schmitz of the Southeast Regional Climate Center for the stats).  And yet in the first week of October several low temperature records were set.

At the same time, Kazakhstan and other areas in Europe and Asia are reporting the return of winter a month early, causing losses in wheat yield due to snow on the unharvested fields (see story and video here).

What is causing these extremes in temperature?  This year we are experiencing what meteorologists call a “high-amplitude wave pattern”.  In this situation, the circulation of air around the globe at mid-latitudes exhibits wide swings from north to south.  In areas where the pattern is a ridge of high pressure, temperatures tend to be high and come from the south; in areas where there is a trough of low pressure, the air tends to be cool and come down from the north.  The illustration here, from a May 2014 example, shows the big swings in flow around the globe.  In other years, the wind tends to blow straight from west to east, minimizing the extremes that occur in a higher-amplitude period.  Once the wave moves from one phase to another at your location, rapid changes in temperature can often be seen.

These high amplitude patterns have happened in the past, and climatologists are still trying to understand why they occur in some years but not in all. 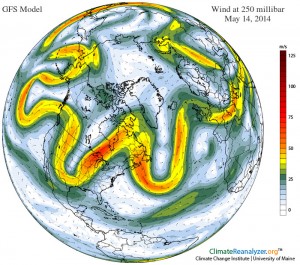 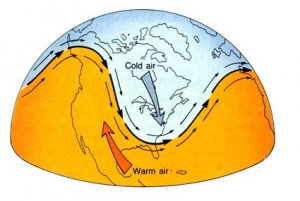