It is approaching the end of the month, and most of Georgia except for the counties along the northern border and a patch in SW Georgia have experienced below normal rainfall, even in a month that is usually the driest month of the year.  Parts of east central Georgia have only received between 10 and 25 percent of their normal rainfall.  This week we expect only about a quarter inch when the front comes through in mid-week, which may lead to expansion of drought conditions into that part of the state.  The next drought monitor map comes out on Thursday but is based on data ending tomorrow, before the rainfall is likely to occur.  Augusta has only reported 0.51 inches for the month to date, but that is more than they received in 2013, which was 0.36 inches for the same time period.  There were two years in October when Augusta got no rainfall at all, 1953 and 1987. 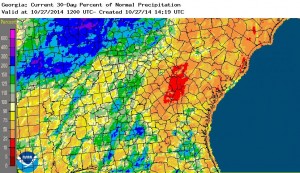 You can do your own calculations to see how monthly values stacked up against other years using the SERCC Perspectives tool at https://www.sercc.com/perspectives?user=true.