Poinsettia: Background on a Christmas Tradition

I remember the first time I saw poinsettias growing in their native Mexico—good grief!  They’re TREES!  Yes, yes, I know—you’re headed back to the big box store to pick up at least one of those beautiful potted plants, and someone is bound to give you one.  Well, you can thank our nineteenth century ambassador to Mexico, Joel Poinsett, for the opportunity.  An avid botanist, Poincett sent samples of the winter-blooming tree, called “Flor de Noche Buena” or Christmas Eve Flower, back to the United States, and by the mid-1830s the plant was widely known here as the “Poincettia.”  But it was still a weedy sort of shrub until in the early 1900s the Ecke family perfected grafting two varieties together, resulting in a bushier more compact plant.  Third generation Paul Ekes, Jr. popularized Poincettias by sending free plants to television shows where they were seen in Christmas specials.  Then in 1991 the Eckes’ secret methods were discovered, and competition has flourished ever since. 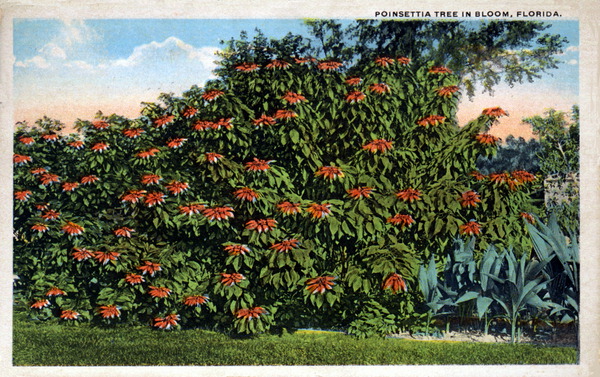 An old postcard photo showcasing the Poinsettia as a large shrub.

That competition has resulted in spectacular forms with bracts of an assortment of colors embellished by streaks, marbling, zigzags, speckles and creamy hems.  Leaves may be flat or curled, and plant sizes now vary from huge specimens to tiny pocket-sized ones.  And those are leaves you are looking at.  Poinsettia flowers are actually found in the tiny yellow pockets called cythia at the center of each leaf bunch or bracts that turn their vibrant colors through photoperiodism.  This simply means they need long periods of darkness to change color.

Poinsettias can be kept outside, but they will not withstand a frost and may die if temperatures dip below 50 degrees for an extended period.  Ideally they want a temperature in the 65 to 70 degree range, a bit cooler than many of us keep our homes.  To keep your plant at its best, give it as much light as you can, but avoid a hot south-facing window.  You will not need to repot unless you intend to try to keep your Poinsettia (it is generally capitalized since it is named after a person); if so, use regular potting soil.  The biggest mistake people make is overwatering.  Remove the foil from around the container and water about once a week.  Avoid wetting the foliage.  Be generous, but do not let plants sit in water-filled saucers to avoid root rot.  Though your plant appears to be in “full bloom,” it is not actively growing, so no fertilizer is necessary.

There are some caveats to filling your home with these beauties.  Like other members of the Euphorbiaceae family, they exude a milky sap, and some people with latex allergies may have a skin reaction after touching the leaves.  However, despite rumors to the contrary, Poinsettias are not poisonous.  An entertaining study at Ohio State University showed that a 50-pound child would have to eat 500 to 600 leaves at a sitting to have any side effects, and since the leaves are reportedly not particularly tasty, that scenario is highly unlikely.  Nonetheless, if you have a determined child, be aware that the most common side effects are upset stomach and vomiting.

Now the number one question everyone asks: shall I try to keep my Poinsettia alive until next year?  Well, the short answer is, why would you want to?  It’s a bunch of trouble, and next year you can buy even prettier ones.  Having said that, I will admit I have had one on my kitchen counter now for a full year—just to see what it would do.  It was fairly small, a gorgeous creamy yellow.  As one is supposed to, I fertilized it using a complete houseplant fertilizer about every two weeks.  The bracts turned a delightful lime green—I have no idea why.  And so, over the year, the bracts have fallen by the wayside, and pretty dark green leaves have taken their place.  I know it won’t recreate the beauty it once had—I have not given it the required darkness.  I just want to see what happens naturally.

For those of you who really want to do the job right, after the holidays decrease regular watering to allow the plant to dry out some but not completely. Relocate the plant to a cool, dark area until spring or around April, then bring it back to a sunny area and water well.  Cut all the branches back to about 6 inches.  You can repot at this time and even take it out and sink the pot in a protected spot in your garden.  When new growth reaches about 6 inches, start pinching out the tips to encourage branching, doing this once a month until mid-August.  As nights become longer, bring in your plant.  Now the laborious part: from September through November it will need 12 hours of total dark during the night, but plenty of light during the day to absorb enough energy for the bracts to turn color.  If you can arrange cooler nights (55-60 degrees) and warmer days (65-70), all the better.  With diligence it may just work.

Or you can go buy another one in a brand new color.