Every year people bring me a host of odd-ball nuts they run across during harvest. No, I’m not referring to people here but actual pecans. I get tiny pecans the size of a pinky-nail as well as those that have some sort of growth abnormality. Two of the most common are “twin-pecans” and “triple kernel pecans”. 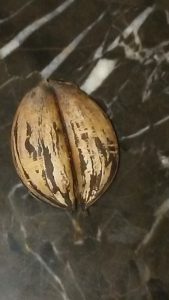 Twin pecans look like one pecan split in two.  In fact, twin pecans are two fully formed nuts joined at the base. At some point during the development of the female flower a genetic miscue or perhaps some sort of insect damage led to the growth of a double flower, which consists of two stigmas and two ovaries but only a single shuck. The twin nuts develop together inside one shuck and only reveal themselves at harvest. So, if you find one of these you will get 4 kernel halves instead of two out of one pecan shuck. A triple kernel pecan is basically a nut in which the kernel inside is divided into 3 pieces instead of the normal two. This is another genetic developmental defect that occurs from time to time.

We are seeing some other odd things coming out of orchards right now that are a little more serious than the issues mentioned above. As most growers are now into their second harvest and it appears most of the volume is pretty much already gone, we are seeing a fair amount of nuts still enclosed in the green shuck. If you cut into these nuts you will see that most of these have sprouted, rotted, or the kernel failed to develop. Back in February and again in April I warned in the blog that we would potentially see some pollination issues with this year’s crop based on the warm winter and its effects on budbreak, especially for Stuart. Most of the observations and reports I have had on this problem have been from Stuart, Gloria Grande, and Sumner. Sprouting or vivipary, embryo rot, and failure of kernel development all occur at a higher rate when self-pollination occurs. The warm winter affected the budbreak and development of many cultivars and some locations were more affected than others. Extreme southern Georgia was generally more affected than middle Georgia as a result of fewer chill hours to the south. This trend is evident in the problem of green shucks, vivipary, and kernel issues. This is, once again, why we recommend planting multiple pollinators in an orchard and never recommend a large block of a single variety.