The Problem with Late Stuarts 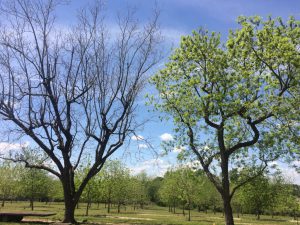 If you have spent any time in pecan orchards in Georgia over the last couple of weeks you have noticed budbreak progressing on most varieties with one particularly notable exception. At this point Stuart is further behind most other major varieties than I have ever seen it. Why is this? Stuart has a relatively high chilling requirement—more so than many other varieties we grow. This results in later budbreak in general for Stuart. But, following a mild winter such as the one we just had (see previous post on this topic), Stuart’s late budbreak gets even later.

The biggest problem this presents is that it creates issues for pollination. Those varieties that normally match up well with Stuart like Cape Fear, Creek, Desirable, and Schley will likely be largely finished shedding pollen by the time Stuart pistillate flowers are receptive. Of those, Schley may have the best chance because it is also lagging a little behind other varieties. So, if all this does translate in to poor pollination, what does that mean for the Stuart crop?

Stuart is a type II or protogynous (stigma receptivity precedes pollen shed) cultivar. Cross pollination is more important for these cultivars than for type I or protandrous (pollen shed precedes stigma receptivity) cultivars. In Type II cultivars like Stuart there tends to be complete separation of pollen shed and stigma receptivity. This helps them to avoid self pollination (which in nature results in a less fit individual). Although self-pollination is undesirable for nut production as well (it leads to increased fruit abortion and reduced percent kernel), it is better than no pollination which leads to even more fruit abortion and quality problems. Therefore Stuart must make up a lot of ground quickly to avoid production problems this year.