Shuck split began at least 10 days early for most cultivars this year and continues to progress at a rapid pace. Most growers with Pawnee have been able to get enough of the cleanup from the storm done to get started harvesting. We are seeing shuck split on pretty much everything at this point. I have seen several orchards of Elliott and Moneymaker which should be ready for harvest next week. Creek, Caddo, and Oconee are not far behind. Desirable, Cape Fear, and Schley look to be 2-3 weeks away. I see a few Stuart shucks beginning to split but don’t get overly excited about this. Stuart tends to have a prolonged shuck split with some nuts splitting well ahead of others on the same tree. We are still at least 3-4 weeks away from seeing Stuarts ready to shake.

Our rainfall during the summer made it a battle to keep scab off the nuts for some varieties but it has created large nut size for this year’s crop. Kernel quality also looks to be pretty good in most orchards as well. Most nuts that I have cut and/or shelled are well filled, even with the large nut size thanks to irrigation and the rain that fell in most places with Irma a few weeks ago. 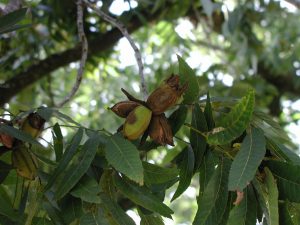 I have heard of some shuck decline in some dry-land orchards and in orchards where the growers felt Irma’s rain was adequate to finish the crop. While the storm’s rain helped, growers should continue to irrigate at about 40-60% of full capacity until they are a few days from shaking trees. If trees with a heavy crop get dried out now, you will see nut abortion/shuck decline/stick tights/tuliping (condition in which the shuck turns black and splits at the end of the nut). The heavy crop loads many trees still bear create tremendous water stress on the tree until the shucks open. This is why it is more of a problem in dry-land orchards but can show up in irrigated orchards as well with a particularly heavy crop. Growers tend to get very alarmed by this but it is something that occurs to some extent each year when the crop load is heavy.

Also getting a lot of calls regarding leaves scorching or turning yellow and dropping, etc. The scorching could be from a variety of things. Most likely a minor foliar pathogen like anthracnose. There are many opportunistic pathogens in orchards that will jump on the leaves when the leaves begin to senesce and the sprayers stop. There is no need to worry about this at this point. The same goes for yellowing leaves. With the rainfall we’ve had this year, some of the N likely leached out a little earlier than normal, which could lead to yellowing. But, I would not make a fertilizer application this late in the year based on yellowing leaves. You will do more harm than good to young trees by fertilizing them right now. Any N applied may delay dormancy of young trees, making them more susceptible to cold damage.

We have been dry since the storm passed in most of South Georgia. Just as I have described for shuck decline above, heavily loaded trees are still using a lot of water right now. If they are not receiving adequate water, the leaves will begin to senesce, turn yellow, and drop as well so keep irrigating. The trees have been through a lot this season and leaves took a beating in the hurricane. Some of these could have weakened vascular connections from the wind. Also, some leaves may be senescing early due to the early crop maturity and stress of the season. While ideally we want to keep as much of the foliage as possible healthy and attached to the tree until the first frost, a little defoliation (<10%) at this point in the season won’t really cause significant problems. October will be here within the next few days and the trees have shifted their priorities. As the nuts reach maturation there is a reduction in the efficiency of the leaves because the tree’s physiology is changing. Its job for the year is done and the leaves begin to shift from supplying energy for nut development to exporting sugars and nutrients to the perennial parts of the tree for energy storage for future use.