Mycorrhizae: Not All Fungi Are Harmful 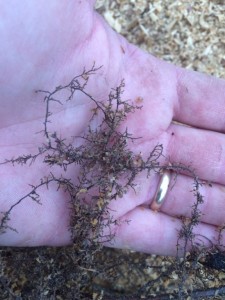 If you’ve planted pecan trees in the past you have probably noticed the fine, hair like structures on the root systems of some trees. These structures are highly valuable to the tree and can have a significant effect on its growth and overall health.

Contrary to most plants, pecan roots do not have root hairs, which, in other plants, function to give the roots more surface area, allowing them to obtain more nutrients. In pecan, this function is carried out by beneficial fungi called mycorrhizae. The mycorrhizal fungi develop a relationship with plants in which they infect the plant’s root system and send out their own thread-like structures called hyphae that increase the plant’s root contact with the soil. In return the plant provides the fungi with sugars produced by the plant’s leaves and transported to the root system.

The word “Mycorrhizae” is Greek for “fungus-root”. There are two basic types of these fungi, those that penetrate into the root cells of plants , called arbuscular mycorrhizae, and those that grow on the outside of the roots, called ectomycorrhizae. It is this last group, the ectomycorrhizae, which colonize pecan tree roots. The spores of the fungi occur in the soil and infect the pecan feeder roots when stimulated by chemical secretions from the roots. As the fungus grows, it encloses the root, forming a dense sheath around it called a mantle. In addition to obtaining water and nutrients for the tree, the mycorrhizae form a barrier to protect the roots from harmful microorganisms and produce antibiotics to prevent infection.

Mycorrhizae tend to prefer soils that are not overly-fertilized and thrive in heavy organic matter.  One example of a mycorrhizal fungus is the popular “pecan truffle”. But just because you see mycorrhizae on your pecan roots doesn’t mean that you have the truffle fungus in your orchard. There are many other mycorrhizal fungi which colonize pecan tree roots and are beneficial to the tree. Mycorrhizae help the tree roots acquire hundreds and even thousands of times more nitrogen, phosphorous, zinc, copper, and other nutrients than would be possible without them by extending the root system of the tree. This is well illustrated in the photo of a pine tree seedling below. 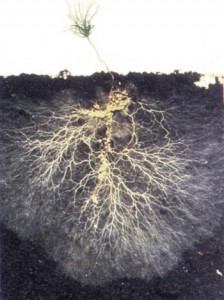 The soil profile shows a significant extension of the seedling’s root system. So, don’t be concerned if you see a lot of hair-like extensions on the roots of the trees as you plant. They are fulfilling a role in the future of your trees.