Be On The Lookout for Asian Ambrosia Beetle 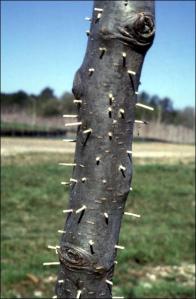 Georgia pecan growers have had major problems with Asian Ambrosia Beetles (AAB) over the last 2 to 3 years. One reason for this is the wet spring conditions we’ve had since 2013. UGA entomologist Will Hudson has had extensive experience with these insects in ornamentals in the past and has observed that anytime we have wet spring conditions the potential for ambrosia beetle problems is increased. The beetles apparently get going in the flooded woodland bottoms, attacking stressed trees and then move out from there into orchards, where they are particularly attracted to young trees. Beetles usually are flying in March but sometimes will begin as early as February according to Dr. Hudson’s previous data but there is no good method of predicting when those flights will occur. I already had a report a couple of weeks ago of new Asian ambrosia beetle damage in the Blackshear/Waycross area.

If you have had problems with AAB in the past or are concerned about any newly planted trees, start monitoring now. The best method for monitoring the beetles’ flight is to set up the monitoring trap Dr. Hudson shared last year. These traps are simply used to monitor the flight and will not control the beetles. See the link from last year’s post here for information on building the trap.   Once you begin to see AAB attacking the traps, it is time to begin spraying for them. Trunks of young trees should be sprayed with a pyrethroid. Barrier sprays of Lorsban will not work for AAB. The beetles are particularly attracted to stressed trees, although they will attack non-stressed trees. Pay particular attention to those planted in poorly drained soil. Once a flight is observed with the traps, it is advisable to spray each week in problem areas until the trees have leafed out.

If you are planting trees this year and do not yet have them in the ground, I recommend doing so as soon as possible. Late-planted trees, especially those planted after the end of February will be more stressed and will be more attractive to the beetles.