Its late in the growing season and this time of year, pecan foliage can begin to develop symptoms of minor foliar diseases. Most of the time these are not really anything to worry about. These generally won’t defoliate the trees in the next few weeks. The leaves are beginning to senesce anyway and minor problems just begin showing up. 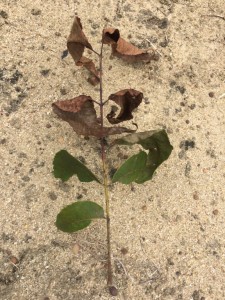 One of these raising its head at this time is a relatively new disease we began seeing just 4 or 5 years ago. Symptoms are expressed initially as a dying or browning of the terminal leaflets on a compound leaf which progresses backward toward the base of the leaf. Eventually it moves into the leaf rachis (the main stem of the compound leaf) and the entire compound leaf may die. If you stand back and look at a tree infected with this disease the scattered dead compound leaves will look like dead brown patches in the tree.   UGA research pathologist Tim Brenneman has identified this as a fungal pathogen called Neofusicoccum. I will be referring to it in the short term as “terminal die-back”. Most minor foliar disease like this infect the leaves a month or two prior to symptom expression. Dr. Brenneman suggests use of a strobilurin or a DMI/strobilurin mix like Absolute or Quadris Top when conditions favor infection (usually prolonged wet conditions). Even if a grower has used these materials their timing may have been off enough to allow infection.  Once you see the symptoms its too late to do anything about it. But, even when terminal die-back occurs earlier in the season we have not seen any long-term damage to the trees and no effect on nut quality so don’t get too alarmed when you see this problem. I’ll provide more detailed information about this disease later but since we are seeing it on a pretty widespread basis I wanted to let folks know what it is.