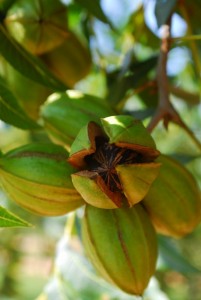 With harvest already started on Pawnee, pecan growers will soon be in the heat of the battle to get the crop harvested and sold. With that in mind, I wanted to offer this overview of how the crop looks to this point and our current market situation. This does appear to be the best crop we’ve had in 2 to 3 years, with an anticipated 110-120 million lbs. The wet spring weather gave way to a dry June, which really helped save most growers from scab. There are still some pockets of scab in the state, mostly in the Albany area and over into Southeast Georgia on highly scab susceptible varieties, but growers did a pretty good job of keeping the nuts clean this year. Insect problems were light until August and September but aphids and mites came on with a vengeance at that time. Most growers sprayed multiple times for both pests late in the season.

The crop appears to be at least 10 days to 2 weeks early. We are seeing shuck split beginning on most of the mid-season varieties at this time. We are probably about 2-3 weeks away from harvest really getting under way on our main varieties, at least in the western portion of the state. Growers east of I-75 have historically started a little later. Nut size is much better than we saw last year and most of the nuts I have cut into or cracked open have been well filled. I’ve been hearing of a lot of pops in the Pawnees that have been harvested. While this is not an unusual characteristic for this variety, I am hopeful that we do not find a high percentage of pops in all varieties, which would indicate a pollination issue.

Contract prices have been mostly in the range of $2.60-$2.70 for Desirable, Cape Fear and Sumner (I am told China has developed a taste for Cape Fear and Sumner) and $2.15-$2.25 for Stuart. Domestic consumption appears to be up and the over-supply of small pieces from Mexico that hurt the domestic market a few years ago has been exhausted so we should see an improvement in prices on the domestic market.  Cold storage levels are lower than they have been since 2012.