What Happened to the 2014 Pecan Crop? 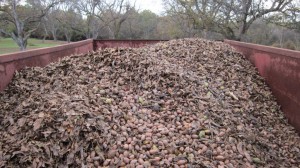 Early estimates placed the 2014 Georgia Pecan crop at 80-90 million lbs. But,  as pecan producers have been gathering their crop, it has been obvious that the lbs making it into the wagons are not what they appeared to be on the tree. Current estimates have fallen to 70 million lbs or less. The rain we’re experiencing this week provides an opportunity to slow down a bit and take a look at some data to help explain the issues we see with this year’s crop. Nut size is obviously off and I won’t go as deeply into that issue since I covered nut size in my last post but nut size does play an obvious role in the reduced weight being accumulated. All the reasons I mentioned before— cool temps during nut sizing, drought, and lack of sunlight—played a part in the smaller nut size; however, pollination is also an important factor to consider whenever pecan quality is affected. In addition to small nut size, we see a significant percentage of “pops” or nuts that failed to develop kernel in this crop, which is almost a sure sign of poor pollination.

So, lets look at pollination conditions during spring of 2014. The first thing to consider here is that the crop was abnormally late. This dates back to the late bud-break we saw in the spring, a result of cool spring temperatures. Darrell Spark’s model shows that March temperatures have a strong influence on the date of budbreak, while April temperatures influence the rate of shoot growth and flower development.

From 1912-2003, maximum temperatures in Tifton during March and April average 69 and 77 degrees F respectively. For 2014, these temperatures were 65.7 and 74.7. This may not seem like much, but 3 degrees can make a big difference to a plant. By comparison, maximum March and April temperatures for 2012, a year with early crop maturity were 77 and 79 degrees, respectively. In addition, spring 2014 was wet in South Georgia. Average April rainfall for Tifton is 3.81″ from 1912-2003. We had 8.72″ in April 2014. Such cool, wet conditions are a perfect recipe for poor pollination.

UGA pecan breeder, Dr. Patrick Conner collects pollen shed and pistil receptivity data each year for the many varieties growing at the UGA Ponder Farm. He shared with me these numbers for Desirable and Stuart, which you can see below: (Click on image to enlarge) 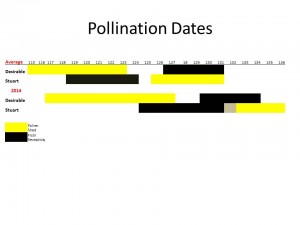 As you can see, Desirable and Stuart normally match up very well with each other. The pollen shed period for one normally covers most or all of the other’s pistil receptivity . However, in 2014  Stuart pollen shed only caught the last 3 days of Desirable pistil receptivity, while Desirable pollen only covered the first 2 or 3 days of Stuart receptivity. While this simply serves as one pollination example in one location, you can see that its very likely pollination was off this year. Pollen shed matched up poorly with pistil receptivity and its likely that the days they did match up, poor weather conditions limited the ability of the pollen to disperse properly. These factors likely played a large role in the issues we see with the size and volume of the 2014 pecan crop.