Why is Nut Size So Small This Year? 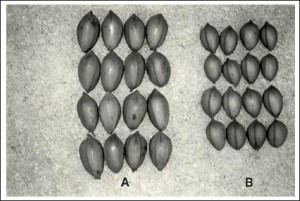 Pecan harvest is well underway and the most consistent observation regarding the 2014 pecan crop is small nut size. The effect of various factors on pecan nut size has been well studied; however, the exact reason for this year’s consistently small nut size is difficult to pin down. Most likely, there are several factors at work.

Soil moisture has a greater influence upon nut size than any other factor. When 2014 began we were coming off  two relatively wet years and indeed 2014 started off wet as well. In fact rainfall in the Albany area from Jan-May was 36% greater than during the same period in 2013. Thus, many growers may have expected sub-soil moisture to remain adequate for pecans when the weather began to turn dry in June. June-July make up the nut sizing period for pecans. Rainfall in the Albany area totaled 7.65″ from June 1-Aug. 30, 2014. This is 48% less rainfall than we saw in 2013 and even 22% less than what we saw in the drought year of 2011. Dry-land orchards have no hope of developing large nut size in a dry June/July. But even irrigated orchards are suffering small nut size in 2014. Part of the problem could be that producers failed to begin irrigating soon enough in sufficient amounts to achieve optimum nut size in such dry conditions. But, there is likely more to the story.

The second most important factor affecting nut size is crop load. Crop load is hit and miss this year. Some orchards have a pretty heavy crop, while some have virtually nothing. All things being equal, where the crop is heavier nut size should be expected to be smaller.

One often over-looked factor with an influence on nut size is temperature during the nut sizing period. The more heat, the larger the nut size. Average daily maximum temperatures for Albany during June and July were 3.4% cooler in 2014 than the average of the previous 3 years. Average daily minimum temperatures for the same period were 1.3% lower in 2014 than the previous 3-year average, also placing the potential for nut size at a disadvantage.

Sunlight, of course, drives the process of photosynthesis, which affects all aspects of plant growth and development. We are in the 3rd year of a sunlight study in Crisp County, GA and have been collecting sunlight data on crowded trees as well as those in the open from June through September. When averaged for these two treatments, sunlight levels were 24% lower in 2014 than in 2012 and were even slightly lower than those for 2013. This factor probably also had an effect on nut size.

While I feel that these 3 environmental factors; dry conditions following a very wet period,  cool temperatures, and low sunlight levels are the primary culprits, you can add to these issues the early scab pressure and the insect pressure we saw throughout the summer. It is likely that all of these factors played a role in the small pecan nut size we are currently experiencing.