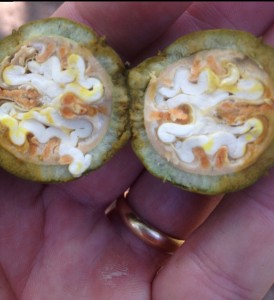 Nut development has accelerated rapidly over the last 2 weeks. Shuck split began on ‘Pawnee’ over the weekend in south Georgia, which means harvest of that variety will probably begin in 2 1/2 to 3 weeks. This means that nut maturity is still about 10 days or so behind normal. The calendar date of nut maturity for a given variety varies from one year to the next because the date of fruit maturity is dependent upon the accumulation of heat units in the early spring.  Our spring in Georgia was even cooler in 2014 than we saw in 2013. The photo above shows nut development of ‘Stuart’ on September 5. You can see the kernels are filling well in this particular orchard and filling is almost complete. ‘Schley’ in the same orchard was still mostly in the gel stage at that time. Still, I expect both of these varieties to be ready for harvest at roughly the same time this year. ‘Stuart’ nut maturity and shuck split is more prolonged and staggered, while that of ‘Schley’ is a little more uniform.  Nut maturity in Schley normally precedes that of ‘Stuart’ by about 2 days on average. We had a pretty cold winter last year and this causes nut maturity of ‘Stuart’ and ‘Schley’ to be similar. Following mild winters ‘Stuart’ nut maturity may be delayed another 10-14 days due to its high chilling requirement, while ‘Schley’ maturity will remain roughly the same. ‘Desirable’ nuts that I have sliced open this week were still mostly in the late water stage , although I did see some gel forming in some of them. From this point forward ‘Desirable’ nut maturity should develop rapidly. They always seem to linger in the water stage and then fill all of a sudden.  I would expect that it will be late October or early November (depending on your location) before harvest begins in earnest on these varieties.

Chinese demand for pecans at this time seems strong. Size will play a large role in export prices offered to growers and our size is highly variable this year, largely as a result of scab pressure early and dry weather during nut sizing. Two weeks ago early contract offers I had been hearing from various growers were at $2.20-$2.35 in-shell  for ‘Stuart’ and $2.75 for ‘Desirable’. Over the past week, these prices seem to have gone up to around $2.40-$2.50 for ‘Stuart’ and $2.85-$2.95 for ‘Desirable’. I have heard blends priced in the $2.40-$2.45 range. Again, size will be the determining factor in price. Small nuts will not bring high prices.