I just returned from the National Pecan Shellers’ Association Annual Meeting in Seattle, Washington where New Mexico State Pecan Specialist, Richard Heerema and I gave a presentation on the cost of pecan production. Under the growing conditions we faced in 2013 and at the beginning of 2014, the cost of production rises rapidly as a result of the increased number of fungicide sprays required on scab susceptible commercial cultivars. Not only has the number of sprays gone up as a result of the need for shortened spray intervals, but thanks to emerging fungicide” resistance” or at least insensitivity issues, many growers are using higher rates than they had in the past or are using more expensive products, both of which increase the cost of production. It looks as though this led to a 60% increase in the cost of scab control alone as you go up from 10 sprays to 16 sprays. In addition to the increased cost of managing pecan scab, black aphid and mite pressure were high in 2014. Both of these pests are expensive to control and many growers had to spray multiple times for both pests, which also increased the cost of pecan production. See the graph below for a breakdown of the annual variable cost of production, which totals over $1600/acre with 16 fungicide sprays. 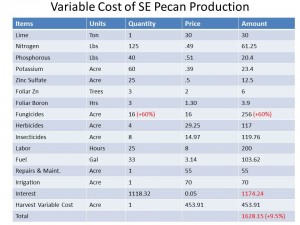 At such a high cost growers are justifiably concerned about the price they need for their crop. See the chart below for break-even prices for pecans at various prices and yield levels given a cost of $1628.15/acre: 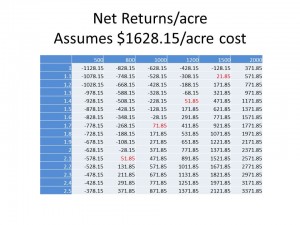 In a “normal” year—neither too wet or too dry—10 fungicide sprays will usually be enough to manage scab. This brings the cost down to nearly $1500/acre as you can see below. Break even prices at a cost of $1485.88/acre follow: 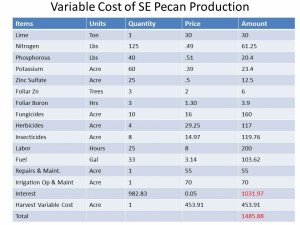 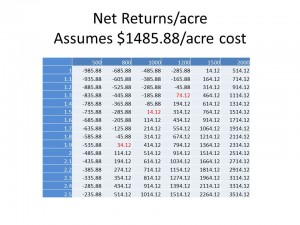 Keep in mind that these are all variable costs only. Fixed costs like land payments, equipment, overhead, etc. will increase the total cost of production by another $450 or so. The cost of production will vary from one grower to the next but these numbers should give some idea of what the general cost may be for growing pecans.