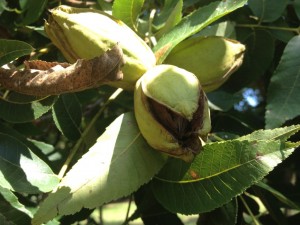 I’ve had a number of calls this week about various worries and issues as harvest approaches. Most of it has centered around leaf scorching, poor foliage condition and whether or not to spray for aphids at this point. Overall, foliage condition for 2014 has been the worst I have ever seen. Early leaf scab, anthracnose, black aphids, mites, an emerging disease you’ll hear more about soon called Lasiodiplodia, nutritional issues resulting from the wet spring conditions, and heavy use of Elast fungicide (which can cause leaf bronzing with high rates on some varieties) to combat scab have all contributed to the beating the foliage has taken. Growers should bear in mind that it is October, harvest is just around the corner, and while we certainly don’t want to see heavy defoliation, pecan trees can tolerate a little leaf loss at this point without disaster.

As the season wears on and the nuts mature, leaf efficiency changes to reflect the needs of the tree. In the presence of fruit, the photosynthetic rate of both sun and shade leaves is increased and the rate of leaf senescence is slowed down so that trees are able to recover as much as possible from the energy-draining process of nut production. As the nuts reach maturation there is a reduction in the efficiency of the leaves because the tree’s physiology is changing. Its job for the year is done and it begins to shift from supplying energy for nut development to storing energy for future use.

The common thread in all of these studies is that complete defoliation of pecan in September virtually guarantees no return crop. But do you have to maintain every leaf on the tree prior to frost? No. Depending upon crop load, pecan trees can likely tolerate up to 10% loss of foliage prior to October. If much of this is from the lower interior canopy, you’re probably not affected too much because of the low efficiency of these leaves anyway. Those trees with a very light to no pecan crop can probably tolerate a little more leaf loss prior to October and still maintain a return crop. Trees with a heavy nut crop need to maintain as much foliage as possible at least into October, which is where we are now.

So, don’t worry too much about a little leaf loss here and there going forward. I would not advise spraying the trees anymore this season for disease or foliage pests like aphids and mites. Lower temperature are forecasted for next week and shuck split is occurring rapidly. Shuck split began on Pawnee 2-3weeks ago and I have seen shuck-split on Elliott,  Desirable, Cape Fear, Stuart, Schley, Creek, and Oconee as well. The main harvest season should kick off in about 2 weeks so the sprayers can be put away.