Hurricane Dorian may bring power outages, downed trees, heavy rain and possibly brief tornadoes to Georgia this weekend and well into next week, according to Pam Knox, director of the University of Georgia Weather Network and an agricultural climatologist.

“Dorian’s path has been farther east than originally forecast, which means that its circulation has avoided the mountainous terrain of the Dominican Republic and Puerto Rico. That means it was less disrupted than expected, and now is forecast to approach the east coast of Florida as a potentially major hurricane by Monday,” Knox said.

The storm is expected to affect all of the Georgia coast, but Dorian’s path is likely to change significantly over the coming days, Knox said.

“The more eastward path has also added time before the projected landfall, so that gives us a little extra time to prepare. There is also a slight chance the storm will recurve to the northeast before it hits the coast — in that case, breathe a sigh of relief and think of this as preparation for the next storm,” she said.

Southeastern Georgians should be prepared for tropical storm-force winds to hit as early as Sunday morning. As in any event with potentially heavy flooding, Knox urges Georgians to move equipment and livestock out of low-lying areas before the storm arrives and stock up on fuel and the capacity to provide power for milking, drying of crops, etc. Any outdoor items that could be dislodged by heavy winds and become a projectile should be secured.

Knox says the weather should remain dry through Saturday, but after that the chances for rain go up.

“Along the coast, onshore flow coupled with the already higher-than-normal tides will increase the chances of flooding, and that will only be made worse by the tropical rainfall,” she said. “Spiral bands ahead of the storm could produce brief tornadoes in isolated thunderstorm cells. Power outages are likely due to the combination of wet soil and strong winds blowing trees over.”

With the one-year anniversary of Hurricane Michael just over a month away, Knox urges southwestern Georgia to not let their guard down.

“A number of computer models indicate that the storm could cross the Florida peninsula and enter the Gulf of Mexico, where sea surface temperatures are above normal. A recurve to the north into Georgia is a possibility and, even if the storm weakens as you might expect, heavy rain and brief tornadoes could occur in that situation,” she said.

If Dorian crosses Florida, the storm’s timing would move to early next week, she said.

Georgians in central and northern Georgia have more time to watch the storm develop. Knox says this valuable time should be used to prepare for potential tropical storm-force winds and heavy rain likely Tuesday through Thursday.

“That could change depending on where Dorian actually goes and how fast it is moving,” she said. “The Labor Day holiday weekend means that there will be extra people on the road and in hotels, so don’t wait until the last minute to get gasoline, cash and whatever else you might need in case of power outages and road closures.”

Knox recommends Georgians get current information from reliable sources like the National Hurricane Center, National Weather Service and local emergency managers. Stock an emergency radio with fresh batteries to stay informed should a power outage occur in your area.

For the latest information from UGA agricultural climatologist Pam Knox, follow her on Twitter at @SE_AgClimate, on Facebook at SEAgClimate and on her blog at site.extension.uga.edu/climate.

The Pecan Beginners Course will be held on April 16, 2019 from 8:30am-4:30pm at the UGA Tifton Campus Conference Center. See agenda below.

Take Care of Your Christmas Tree

It’s that time of year again.  People are putting up Christmas trees.  Whether yours stays fresh until after Christmas, or turns into a needle-shedding fire hazard is up to you.

A cut Christmas tree is a living thing, or at least it was when it was cut.  As such, it is perishable.

The first step in making a tree last until after Christmas is to select one that is in good shape.  If you are buying a precut tree, gently grasp a branch on your prospective tree and pull your hand over the branch.  If needles come off in your hand, don’t take that tree home.

Place the tree in a stand with a water reservoir.  Check the water level hourly during the first day to make sure your tree has adequate water.  The first several hours after being put into water, your tree will be very thirsty and take up a lot of water.  If the water level falls below the cut, a seal will form as previously described and the trunk will need to be cut again.

Make sure all electrical equipment to be put on the tree is in good condition and that there is no worn or broken insulation on the lights.  Disconnect lights before going to bed.  Keep the house temperature as low as is comfortable.  Heat can dry out a tree.  Don’t allow pets or small children to climb or pull on the tree.  If small children are present, make sure that no dangerous ornaments are placed on the tree within their reach.

Keep the tree away from heat sources and open flames.  If the tree becomes dry and needles fall excessively, replace the tree with a new one.  As was done when the tree was purchased, gently grasp a branch on the tree and pull your hand over the branch.  If the needles come off in your hand, it is time for a new tree.  Have a safe and merry Christmas!

Many of us county agents are working with Dr. Lisa Baxter who is helping look for new products with BSM efficacy. Still today the use of a pyrethroid labeled for forage use around 10 days after the previous cutting appears to be the best strategy for control. Sometimes a second application 10 days later will be beneficial, especially if the forage is growing slowly. UGA Extension Forage Scientist Dr. Dennis Hancock adds that some formulations add residual control for fall armyworm, but residual insecticides (chlorantraniliprole, dimilin, spinosad, etc.) have proven ineffective at preventing the BSM. They are great for FAW, though. So, consider formulations or tank mixes with them when we start seeing more FAM show up.

With some who missed the first cutting and damage is showing up (6 to 8 inches tall), the best option is to cut or graze the field now and encourage regrowth. It’s better to cut early and accept the loss than have low-yielding, damage crop harboring fly populations. This also prevents shading of any regrowth. The maggot does not remain in cut stems. It exits the stem to the soil and adult flies escape to field margins and other fields. A prompt treatment gives best reduction in damage.

Varieties with smaller stems and leaves seem to be more susceptible to damage. Below is a table from the updated publication Managing Bermudagrass Stem Maggot. 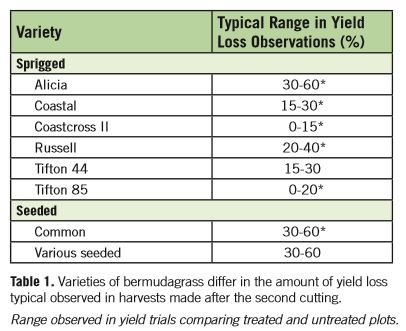 All Georgia corn, cotton and soybean growers planning to use the new dicamba and 2,4-D herbicides, in-crop, must complete the required “Using Pesticides Wisely” training before applying Engenia, Enlist Duo, Enlist One, Fexapan or Xtendimax.

The Georgia Department of Agriculture and the University of Georgia Cooperative Extension Service will be hosting the final “Using Pesticides Wisely” training on Friday, June 1, 2018 from 10 a.m. – 12 p.m. See location details below:

If you are a corn, cotton or soybean producer and you have not completed the “Using Pesticides Wisely” training, this will be your final opportunity to fulfill this mandatory requirement for the 2018 growing season.

For more information, please contact the Ag Inputs Section of the Georgia Department of Agriculture at 404-656-4958, your local UGA Cooperative Extension office or visit www.agr.georgia.gov\24c.aspx.

University of Georgia Farm Again program instructors will host a workshop to introduce potential farmers to tractors and how to safely operate them. The Tractors 101 event will be held on Thursday, April 26, from 9 a.m. to 4 p.m. at the UGA Tifton campus, beginning in the National Environmentally Sound Production Agriculture Laboratory (NESPAL) building.

“This workshop is designed for socially disadvantaged and veteran persons interested in starting a farm,” Rains said. “We want to teach them how to safely operate a tractor and show them the potential dangers of operating powerful machinery.”

In the morning, there will be a classroom session where the parts of a tractor will be laid out in detail. Hands-on training stations will be set up in the afternoon.

Attendees will practice driving a tractor at one station, and they will learn how to connect equipment and study the maintenance of the system at another.

“This is a really helpful workshop for those who don’t know anything about tractors,” Rains said. “We will discuss which model to buy and whether or not they need four-wheel drive.”

At the end of the day, potential farmers will navigate a driving course to determine if they can steer and back up a tractor.

“We just want to give them the basics of operation so they can incorporate these practices into their own farming,” Rains said. “Sometimes there’s a stigma around tractors because people think they are difficult to operate. This is a great opportunity to get familiar with the machine. They will find out that it is actually fairly simple to work.”

This is the fourth workshop of a spring series aimed at small, beginning farmers or veterans who want to start their own farms. Due to the hands-on training, space is limited. Teenagers over 16 years old may attend with parental permission.

Julie Jernigan is an intern at UGA-Tifton.

1.) How do I control ryegrass prior to planting peanuts if I suspect that I might have glyphosate resistance?
Select 2EC @ 8 oz/A or Select Max 0.97EC @ 16 oz/A (or generic equivalents) + 1% v/v COC  would be a good choice for this problem.  Remember that ryegrass stage of growth is important (Figure 1) and that temperatures below 50 F can significantly reduce control.  Higher rates of paraquat (3.5-4.0 pts of 2 lb ai/gal) can also be effective but 2 applications (10-14 days apart) may be needed.

2) What is the best nozzle to use for soil applied residual herbicides?

Generally, nozzle type is not as critical with soil applied residual herbicides when compared to postemergence herbicides.  For many years, I used a flat fan nozzle (11002DG) for all my weed control trials.  Recently, I started using an AIXR11002 nozzle as my standard.  I have also applied soil residuals with a TTI-02 nozzle.  I have not observed any reductions in the performance of residual herbicides when using these larger droplet nozzles.  Check out Figure 2 for a quick look at the coverage provided by these different nozzle types.  However, I would suggest that growers refer to the nozzle manufacturer for more specific information about the potential performance of nozzles with soil residual herbicides.

The following is the impact of tillage on yield potential. Tillage trials were conducted at  the Midville station the last two years. This information was provided by Dr. Scott Monfort UGA peanut specialist.