By Clint Thompson for CAES News

During the Southeastern Hay Contest at the 2019 Sunbelt Ag Expo, Georgia hay producers have a chance to compare the quality of their hay and win cash prizes.

Any producer in Georgia and other Southeastern states including Alabama, Arkansas, Florida, Kentucky, Louisiana, Mississippi, North Carolina, Oklahoma (east of I-35), South Carolina, Tennessee, Texas (east of I-35) and Virginia can submit a sample, but entries must be submitted by the farm where the forage was grown.

A grand prize winner of $1,000 and the use of a Massey Ferguson RK Series rotary rake or a new Massey Ferguson DM Series Professional disc mower for the 2020 hay production season will also be announced.

“From an Extension point of view, the purpose of the contest is to encourage producers to test their hay samples. Regardless of whether they win or not, that’s going to help them to know how they need to feed that hay in the winter,” said Lisa Baxter, University of Georgia Cooperative Extension forage agronomist. “It can save them money down the road.”

For those farmers interested in learning more about taking a hay or baleage sample, see this Massey Ferguson instructional video.

While all farmers should regularly test their hay, Baxter admits that not all do. This contest provides added incentive for all hay producers.

“It does cost to submit a sample to a UGA lab or other labs and to enter the contest, but when you consider what that could save you this winte,r and knowing how you need to feed that hay, it generally pays for itself. This is especially true in a year like this where we run a risk of high-nitrate or low-quality forage. That $20 hay sample is a lot cheaper than what it would cost to replace an animal,” Baxter said.

Nitrates refers to nitrate ions in the forage, which can kill forage animals. This happens when farmers apply too much nitrogen in anticipation of rain, which would promote regrowth and lower nitrate levels. However, rains were sparse this summer and nitrate levels will peak immediately following a rain event. Although producers may be tempted to turn animals onto the forage or cut hay/baleage, they should wait a minimum of seven days from application to allow the nitrates concentrations to decrease, Baxter said.

“What’s going to throw a lot of people out this year are the nitrates. You could have the best sample in the world, but if it’s more than 5,000 (parts per million nitrate-to-nitrogen), you’re immediately disqualified,” Baxter said.

Also at stake this year is a cash prize for the Extension agent responsible for submitting the most samples.

The winners of this year’s hay contest will be announced at the Sunbelt Ag Expo in Moultrie, Georgia, on Tuesday, Oct. 15.

Clint Thompson is a news editor with the University of Georgia College of Agricultural and Environmental Sciences based in Tifton.

UGA Extension Forage Scientist Dr. Dennis Hancock is encouraging cattlemen and producers to sample their hay and baleage to assess the nutritive value of it. This is a little from Dr. Hancock:

Earlier this afternoon, I asked Dr. Saha at the Feed and Environmental Water Lab to summarize the samples received from this growing season so far (April 1-current). He responded quickly and provided the attached summary.

If you compare the values to the means shown in the long-term summary found in Figure 11 of the “Understanding and Improving Forage Quality” Extension Bulletin, you will see that the average values from 2018 compare favorably to these long-term data. BUT (and I strongly emphasize this BUT), there is tremendous variability this year. He kindly provided the ranges in values for these forage categories, as well as the standard deviation. These summary statistics alert us to the real risks out there: There are many samples that are extremely low quality. For reference, wheat straw generally has a TDN value of ~45% or less. Note the range in the quality on some of these samples.

The final column in the attached is one that I calculated which is the coefficient of variation (standard deviation as a percent of the mean). Normally, we see a CV of ~10%. This year, the we have a LOOOOTTTTT more variability. Some categories are showing as much as 38% CV!

So, please, please, please!!! Encourage your producers to test their hay. Hay testing is almost always economical, but it may just help the producer prevent the death of some of their livestock.

It’s that time of the year for exhibitors to get their hogs for the Lowndes Area Market Hog Show. Entry deadline for the show is September 14th. The show will be held November 5th and 6th at 6:00 PM with the sale being November 7th at 7 PM. A change this year is showmanship will be on Monday night and weight classes being judged on Tuesday night  If you do not have a child involved in showing, try and come out and support these exhibitors at the show. Feel free to call the office 333-5185 if you are interested in showing or need your hog tagged.

Is Cottonseed Going To Make My Bulls Infertile?

As we’re getting into summer, many producers with fall calving herds have picked out calves to keep as bulls and considering a developing ration to feed their bulls.  OR, for winter/spring-calving herds, producers are pulling out bulls and considering supplement to put weight back on them.  Sooo, every year, about this time, I get the phone call or email asking if their bulls are going to be sterile because there is whole cottonseed in the ration they are using.  My answer is always, absolutely not 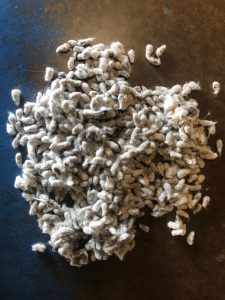 IF you stay within the recommended feeding levels.  That brings up three questions to discuss:

What is it about whole cottonseed that causes concern?  The answer is gossypol.  Gossypol is a yellow pigment produced in the roots, leaves, stems, and seeds of the cotton plant, with the greatest concentration occurring in the seeds.  This compound acts as a natural defense, aiding in resistance to pests.  Gossypol has been studied for years and has shown to be toxic to monogastric animals (i.e. pigs, mice, humans, etc.) and pre-ruminants (i.e. cows, sheep, goats, etc. who’s rumen has not developed yet).  For reference, monogastrics and pre-ruminants should not consume a diet more than 100 ppm gossypol.  This is why we recommend not feeding whole cottonseed to calves under 400 lb.  In fact, gossypol has been studied extensively as a birth control method for males!  However, the results have been extremely variable.

Can whole cottonseed cause infertility in bulls?  As indicated earlier, no.  The question then becomes, why is it such a hot topic?  Early research in smaller mammals, in combination with cottonseed products growing in popularity in the 1960’s, 70’s and 80’s, led researchers at Texas A&M University to look at the effects of gossypol on developing bulls.  These researchers mostly found no differences in reproductive development of bulls fed diets containing gossypol.  When the researchers did find differences, whole cottonseed was fed at or above 40% of the diet, or from Pima cotton.  Pima cotton contains a different isomer of gossypol compared to Upland cotton.  Most cotton grown in the Southeast is Upland cotton.  The 40% in the diet is an extremely high amount of whole cottonseed and would not be recommended.  However, these results have been interpreted as affecting fertility.

What is the recommended feeding rate of whole cottonseed? From a nutritional standpoint, whole cottonseed is an excellent feedstuff when utilized correctly.  Nutritionally, it is high in energy (95% TDN), protein (24% CP), and fat (approximately 20%).  Although the fat content does contribute to the high level of energy, if the fat content in the ration is too high (over 5%), it will negatively affect fiber digestion in the rumen, decreasing animal performance.  For this reason, we recommend that whole cottonseed be limited to 20% of total intake, or no more than 6 pounds per day.  Notice that this is half of what was fed in the previously mentioned research.

When the price of whole cottonseed allows it to be used, it can be an excellent feedstuff.  If you are having issues with fertility in your bulls, make sure all the other aspects of bull management are in place (e.g. breeding soundness exam, injuries, etc.).  Very rarely, if ever, will whole cottonseed cause infertility in bulls.  As one of my mentors from Virginia Tech, Dr. Terry Swecker, would say, “If you hear hoofbeats, don’t go looking for a zebra… Look for the horse first!”.  If you have any questions on whole cottonseed, or would like help incorporating it into your nutritional program, contact your local Cooperative Extension office The Impacts of China Trade Tariffs on Georgia Livestock Industry

China implemented a 25 percent increase in import tariffs on United States pork and is expected to increase import tariffs on United States beef products by 25 percent. However, unlike many row crops and other agricultural products, China is not a primary destination for United States meat products. Beef exports to China only resumed recently and there is not yet a significant amount of beef being produced in the United States that is exported to China. In 2017, the United States was the second largest pork producer after China, and the largest pork exporting country (USDA FAS, 2018b). Twenty-two percent of pork produced in the United States enters the export market (USDA FAS, 2018b). From January 2013 to January 2018, the USDA ERS reports that mainland China made up 7.5% of total United States pork exports, coming behind Mexico (29.3%), Japan (25.1%), Canada (10.4%), and South Korea (8.1%). Pork production is mainly concentrated in the Midwest and North Carolina, and Georgia is not in the major pork producing regions. The impact of the tariffs on pork will be minimal on Georgia’s agricultural industry. However, the reductions in pork prices could hurt some of the pork producers in Georgia. For beef and pork (and other meats), the NAFTA trade discussions are a far bigger concern than Chinese tariffs.

Short-term market fluctuations this year in both cattle and hog markets will almost certainly depend much more on rising supplies, domestic consumption, and exports to other countries than on Chinese tariffs. A recent report by the USDA FAS indicates that the reductions in exports to China will mostly be offset by the increases in shipments to Japan, Mexico, and the Philippines. Exports of both pork and beef from the United States are expected to rise this year, in part due to relatively low United States prices (USDA FAS, 2018a).

In the long term, however, these increased tariffs on pork and beef products constitute a missed opportunity, as China is the number one pork-consuming nation in the world. New sources of demand for United States producers are hard to come by and higher tariffs on beef and pork will likely result in increased production in other countries to fulfill China’s growing demand. This will put the United States at a competitive disadvantage in the long term if the tariff increases are put in place on United States beef and pork products.