Hay has many benefits which makes it the most commonly used stored feed option on livestock farms. Unfortunately, a lot of money is lost each year by not investing in suitable storage options. It is estimated that the total value of hay storage and feeding losses nationwide exceed three billion dollars annually! Time, labor, and monetary inputs are lost along with the hay. Unfortunately, many producers probably do not realize how large their losses really are, or that with a small amount of effort or expense they could be reduced considerably.

Proper hay storage has a cost. If producers are seeking to reduce losses they must account for time and labor. Nutritional value of hay has a great deal to do with determining which storage options
are most cost effective. The higher the quality of the hay, the greater the impact of storage and feeding losses. Storage losses also increase the quantity of hay needed. Additionally, it will lower forage quality of the remaining hay enough that additional supplementation is required. 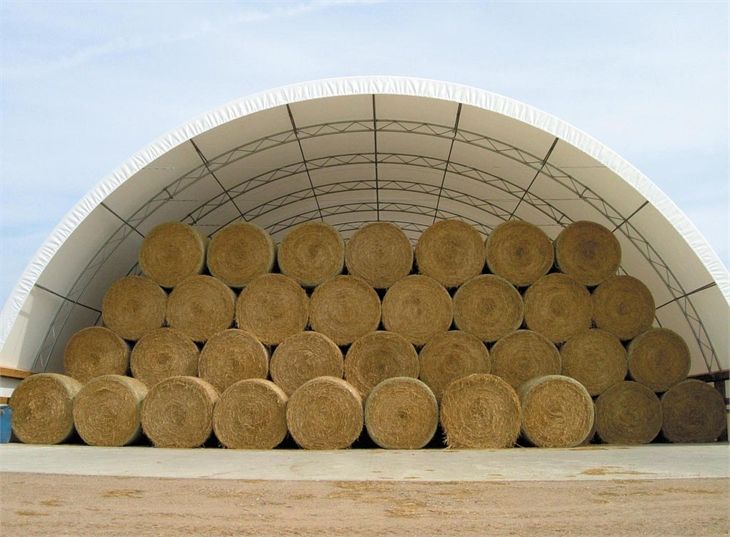 The following are options for storing hay outside:
• In field
• In rows
• Individual covers
• Wrapped
• Pyramid stack

A very important thing to remember is, cheapest is not always best. The lowest cost alternative is to leave bales on bare ground, with no covering. Bales can lose up 40% of their dry matter in the first six months if stored in this manner. There are several things that affect weather damage during outside storage.

These are:
• climatic factors
• size of the bale
• forage species

Weathering primarily affects hay in the outside edges of round bales. Moisture content increases by as much as 120% in bales stored outside, on the ground without covers. Weathering begins slowly, but then accelerates because hay that has been subjected to the elements is more easily penetrated by rain and doesn’t dry as quickly. Consequently, the diameter of the bale affects the proportion of the hay contained in the surface layer, and thus the magnitude of losses. In our area up to 8 inches of spoilage can occur on the outside of large round bales stored outside with no protection.

If bales are stored on bare ground, they should at least be on a slope that is well-drained. A fairly low-cost option is to spread a layer of crushed rock or gravel on the surface area where bales will 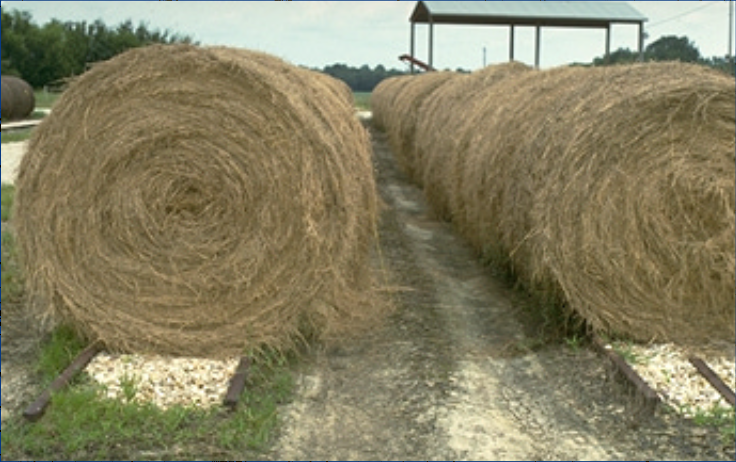 be stored. This will reduce the amount of moisture that seeps into the bales over time. An even better base can be provided by arranging used wooden pallets. These not only form a moisture barrier, they also allow air to circulate under the bales, reducing storage losses by two-thirds or more.

Bales can be protected even more by covering them with a plastic tarp. This choice is more economical when bales can be stacked several layers high. Uncovered bales should not be stacked, however, as this prevents water from running away from them and keeps them from drying out. Low cost plastic requires a minimal investment, but may not be reusable. Thick plastic or canvas tarps are costlier but can be used for multiple years. Properly positioning and fastening a large tarp may require two or three individuals working together.

Individual covers have become more economical and more popular in recent years. Bales wrapped with plastic netting or sleeves shed water better than those wrapped only with twine.

For those who are looking at long term options, storage facilities may be the most economical choice especially when reduced spoilage losses are considered.

If the typical dry matter storage loss of dry hay during inside storage is usually around 5%. If this is compared to the 40% or more with hay stored outside in the Southeast, it isn’t difficult to see that reduced losses can begin to provide payback on barn construction. This option involves a higher initial cost, so permanent storage facilities work best for those producers who plan on storing or feeding large quantities of high-quality hay over a long period of time.

Storage buildings may provide benefits in addition to quality hay storage. For example, part of a hay barn might be used for other purposes during a portion of the year. The overall value of a farm should increase with the addition of a hay barn. Remember, fires that damage or destroy hay and barns cost farmers thousands of dollars in terms of building replacement, feed replacement, and lost revenues. This can be avoided by proper harvesting and storage practices. Hay fires usually occur within six weeks of baling. Fire can occur in loose hay, small bales, large bales, or in stacks. Fires can start with hay stored both inside and outside. Regardless of when or where the fires occur, the most common cause is excessive moisture. Since the moisture content of hay is a key factor, it is important that the crop be cured properly before baling. When storing hay inside, be sure there are no leaks either from the roof or the water lines. When stored, hay may be at the proper moisture, but wetting from a leak can result in a fire.

In summary, proper hay storage cuts down on deterioration. It is important to understand that hay storage options are directly related to hay losses. These losses can be substantial and cost potential profits on already slim margins. Always protect hay from moisture. Remember, the cheapest option in the short term can prove costly in the long run. Storage losses can be calculated based on the selling price of hay. Always harvest for quality or buy good hay and protect your investment by choosing the correct storage option.