Wetter than normal weather expected to continue in November 2019

The latest monthly climate outlook for November 2019 was released yesterday by NOAA. It shows that most of the Southeast will have equal chances of near, below and above normal temperatures, which is not surprising since it is hard to tell exactly where the pool of the coldest air coming south from Canada will reach. Virginia leans slightly towards cooler than normal temperatures and the Florida Peninsula is likely to continue to see warmer than normal temperatures. Precipitation is expected to be wetter than normal for most of the region. Because of that, drought is expected to be reduced in many parts of the Southeast, but may persist in southeast Alabama, the Florida Panhandle and southern Georgia. 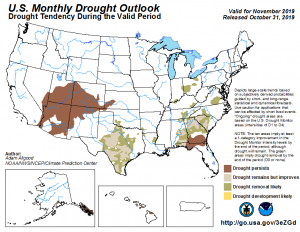