With nearly the entire globe warming (although some parts are warming faster than others), it will take concerted effort by everyone to help reduce the amount of greenhouse gases in the atmosphere and reduce the trend towards warmer conditions. Farmers are an integral part of this, and many of the actions they can take are also good for their checkbooks. Indiana Prairie Farmer posted a story which lists some of the common-sense actions that ag producers can take to help fight climate change and help themselves at the same time. You can read it here. 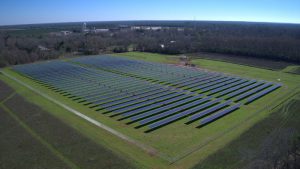 From peanut farmer to solar farmer . . . A view of the new solar “farm” on land owned by former President Jimmy Carter, with the city of Plains seen in the background. Nearly four decades after he turned heads by installing solar panels on the White House roof as part of his push to increase “clean” energy use in America, Carter has leased part of his property to SolAmerica. The Atlanta based company says more than 50 percent of Jimmy and Rosalynn Carter’s hometown will be solar-powered as a result.