The latest ENSO update from NOAA shows that there is no El Niño or La Niña occurring in the Eastern Pacific Ocean at present. Temperatures there are fairly close to the 1981-2010 average. Neutral conditions are likely to continue for the next few months, so short-term climate variations will come from other variations like the Madden-Julian Oscillation. But if you look at the sea surface temperatures around the world, you can’t help but be struck by the widespread conditions of above normal temperatures, particularly in the North Pacific, which may affect our weather patterns this winter because that heat will help to anchor the large-scale waves that drive our weather. You can read more at Climate.gov at https://www.climate.gov/news-features/blogs/enso/november-2019-enso-update-people-your-neighborhood. 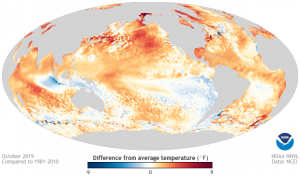