The latest Drought Monitor, released this morning, shows a significant expansion of extreme (D3) drought across the Southeast in response to the much-above-normal temperatures and continued dry conditions which are affecting many parts of the Southeast. Extreme drought more than doubled in areal coverage across the Southeast, with expansions in Alabama, Florida, Georgia and South Carolina. Moderate (D1) and severe (D2) drought also expanded in North Carolina and Virginia. Alabama saw a decrease in drought in the northwest corner due to heavy rains which fell there. There was no change in drought conditions in Puerto Rico.

Fortunately, the 7-day rainfall map shows a return to wetter conditions across parts of the region, although northern Florida, southern Georgia and surrounding areas in Alabama and South Carolina will miss most of that rain, so we may not see an expansion of drought in most areas in next week’s monitor. 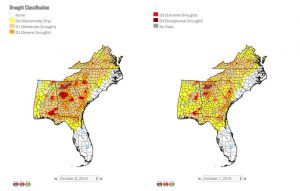