NOAA released their latest monthly and 3-month outlooks for the climate earlier this week. They show a continued trend towards warmer than normal temperatures for both November and the November through January periods across the region. This is based on long-term temperature trends towards warmer temperatures since the 1960’s, although there is still a lot of year-to-year variability. And of course it will be winter so some cold outbreaks are expected even in the warmest of years.

There is no strong signal on precipitation for the next three months. November shows a slight edge towards drier than usual conditions, based mostly on forecasts for drier weather once the next week or two’s storms pass. Equal chances of near, below and above normal precipitation amounts are predicted for November through January, since neither El Niño or La Niña are expected to be present. We will see what the impact of a blob of warm water in the Pacific Ocean has on the atmospheric wave patterns that set up this winter’s climate, but it is too early to say what effects that might have.

Drought typically is reduced in winter seasons because there are not many impacts since many plants are dormant and not using much water. Evaporation is also reduced due to the lower temperatures. So the CPC predicts that much of the current drought in the Southeast may go away this winter or at least improve over the next few months. 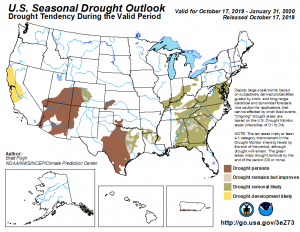