Drought expansion across the Southeast this week ahead of rain

The latest Drought Monitor, released this morning, shows an expansion of all categories of drought in every Southeastern state during the last week. It is important to keep in mind that the cutoff for data for this map was Tuesday morning, before most of the rain fell in southern and central Georgia and surrounding areas, so reflects conditions that were occurring prior to this rain event.

With the rain that fell after the cutoff as well as the rain that is expected to occur over the weekend, it seems likely that drought levels will improve in next week’s DM in the areas that got good amounts of rain. Northern Georgia and NE Alabama as well as western parts of the Carolinas were largely missed by the rain earlier this week and will most likely not see a lot of rain from the tropical disturbance that may cross Georgia on Saturday, so they will be less likely to improve, but could see rain from a front moving into the region early next week. 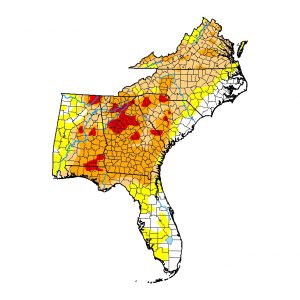