Today is the climatological peak of the Atlantic hurricane season

September 10 is the peak of the hurricane season in the Atlantic, which means that historically today is the day that has had the highest number of tropical storms and hurricanes. And while we have no active storms now, there are three areas that are under watch by the National Hurricane Center. The two in the eastern Atlantic won’t be a threat to land for many days, if at all, so we won’t have to worry about them for quite a while.

The area north of Hispaniola is predicted to move westward into the Gulf of Mexico, where warm water could help it to develop into a tropical depression or even a storm if all the ingredients come together. The most likely impact from this tropical low will be some rain in parts of the Southeast, which would be great for the dry areas we are seeing pop up around the region. In Alabama southern parts of the state could see some rain by Sunday morning, and in Georgia the current forecast (which can easily change since this system is very unorganized now) is for rain in the time period from later on Sunday through Tuesday. Typically up to 30 percent of our summer rainfall comes from tropical systems, so they can be a blessing as well as a curse. 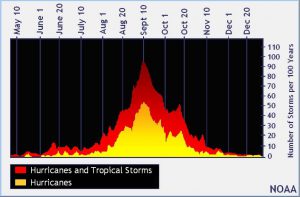 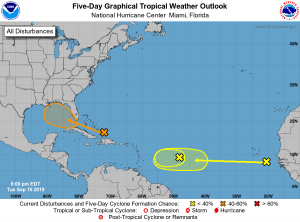