More activity in the tropics

The tropics are starting to become more active, which means that those of us in the Southeast need to start watching more carefully. Today the National Hurricane Center’s 5-day forecast shows an area of 50 percent chance of development in the next five days along the east coast of Florida extending up to the Outer Banks of North Carolina. Even if it does not reach tropical storm status, it could still bring gusty winds and rain to areas along the East Coast, although other areas should not be affected. A low pressure center in the western Gulf of Mexico is not predicted to develop into a tropical storm at this time, but could also bring rain along the Texas and Louisiana coast as well as farther inland, including parts of the Southeast depending on where it is steered once it comes on shore. A hefty tropical wave coming off of Africa is something to watch long-term, and it could develop once it gets out of the area of Saharan dust which has been inhibiting storm development so far this season. Some of the models are also giving hints of more Gulf development in the future but there is no real confidence in these model storms at this time. Still, something to keep an eye on. Now what I mostly see is some heavy rain potential along Florida and the East Coast, and potentially more rain from the Gulf low if it moves our way. 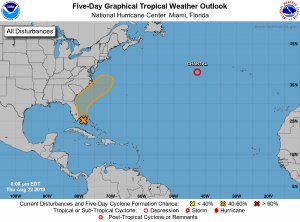