Some shifts in the driest areas this week

The latest Drought Monitor, released this morning, shows that the overall coverage of dry conditions and drought in the Southeast has changed little from last week. However, there have been some shifts in where the driest areas are. While improvements were seen in Virginia, North Carolina, Georgia and Florida, dry areas expanded in Alabama and a small area of severe drought was introduced to South Carolina. Drought remained unchanged in Puerto Rico and was located along the southwestern coast of the island. 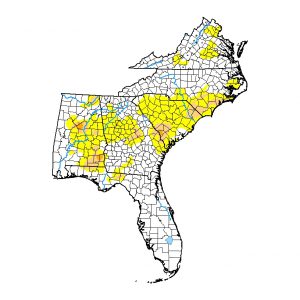