Can some birds predict the strength of the hurricane season better than computers?

Here is an interesting story about the prediction of Atlantic hurricane seasons by a type of bird called a veery, as published in Audubon magazine. A study by an ornithologist showed that in years which turned out to have bad hurricane seasons, the birds finished their nesting seasons early to prepare for their migration to South America, whereas in years with mild seasons, they stuck around longer and had an additional brood. The story talks about why this might actually have scientific skill and how the scientist discovered the relationship. You can read it here. 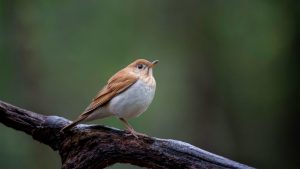