NOAA released its revised hurricane forecast for the Atlantic Basin this week. It shows an increased chance of tropical storms and hurricanes over the 2019 season, in spite of the fact that the early part of the season has started quite slowly. So far there have been just two named storms, including Hurricane Barry which made landfall in Louisiana and caused devastating flooding in Arkansas earlier this year. The revised forecast shows

That means that for the remainder of the season they expect 4-8 hurricanes and 2-4 major hurricanes. Of course, there is no prediction of where the storms might go or if they might make landfall. There is no forecast for any storm to develop in the next five days, but some longer-range forecasts indicate that more activity is likely as we approach the end of August and the peak of the hurricane season in early September. 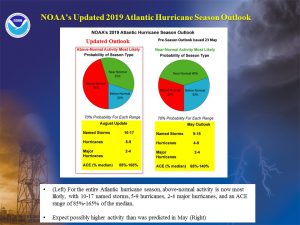