Could London be as hot as Barcelona by 2050? An urban climate researcher has doubts

A recent story making the rounds online tries to pair cities by taking one city (for example London) and looking at its projected 2050 temperature to find another city with a current climate that matches what London’s is expected to be according to climate projections. The city London was paired with was Barcelona in Spain.

But one urban climate scientist has doubts that this will actually be likely because how a climate feels depends more on just the air temperature. Cities make their own climates by their pattern of buildings and parks, materials used to build the infrastructure, and other unique aspects. London is a city that is full of parks and is next to the Thames River, all of which help to cool things off. By comparison, Barcelona is a very densely populated city with much less open space. So doing a simplistic comparison like this, while interesting, doesn’t really capture how the climate of London is likely to change in the future, at least not very well. You can read more at The Conversation here. 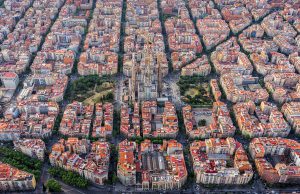